Last Updated on June 14, 2022  Iris Johansen is an American novelist who writes romance novels, suspense novels and crime fiction, the author of the popular Eve Duncan series involving the tormented forensic sculptor who is still grieving the loss of her child, Bonnie, who was kidnapped and mercilessly killed. She also wrote the newer spin-off series called Catherine Ling, a shadowy CIA Operative raised in Hong Kong and the Kendra Michaels series. She has also written the Wind Dancer series and the Hannah Bryson, which includes only two books.

Here is the list of Iris Johansen books for the Eve Duncan series in order as well as the reading order of rest of the series she wrote, starting from The Face of Deception, where we are first introduced to Eve. If you haven’t read this series, you have quite a few great books ahead of you to read and enjoy.

In fact, all the Iris Johansen books are well worth reading, because this author definitely knows how to write her suspense stories. The only books I do not include here are her historical romance series, which are beyond the scope of the site. 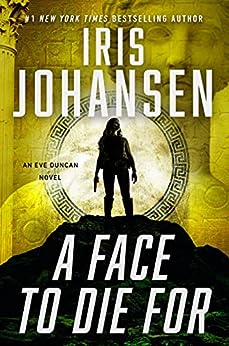 The author Iris Johansen was born in 1938 in St Louis Missouri. She moved to Georgia where she currently lives with her family.

She only started to write books after her children went to college. The first genre she wrote her initial books in were romance fiction in the 1980s.

The crime fiction author started writing contemporary romance novels, however, she soon change to the new mystery genre because (in the author’s own words):

I loved writing romance because I am a great fan of the happy ending. I started writing suspense because of the challenge of all the twists and in depth character studies that it offered me. I still try to incorporate a love story in all my books. It’s the best of both worlds for me!

A decade later, in the early 1990s, Iris Johansen switched to writing to historical suspense romances, however, in 1996 she once again changed the genre she crafted her books in and started to write romantic suspense thriller novels.

The Kendra Michael series is co-authored with her son Roy Johansen, and it currently includes 6 main books and a novella.

While the main Iris Johansen books for the Eve Duncan series includes all 23 novels, some of them have been also classified into other mini-series (like the ‘new’ Eve Duncan 2013 trilogy with Taking Eve, Hunting Eve and Silencing Eve, as well as the Eve, Quinn and Bonnie trilogy published in 2011). However, overall they are all part of what is considered the Eve Duncan series, all the novels having her as a central character.

The series is classified as a romantic suspense thriller, which is one of my favorite mystery genres.

The first of the Iris Johansen Eve Duncan books was published back in 1998 with the title The Face of Deception, and it was a major hit right away. From the very start, we get to know Eve who, due to her own major loss in life, is trying to help other parents who have lost their children to crimes, by reconstructing children’s faces from skulls.

At the same time, throughout the entire book series, we see Eve’s main goal in life: to find the bones of her missing daughter, Bonnie, and bring her home, so she can bury her.

I love this series and I can never get enough of Eve and her stories. The author’s latest book is called Mind Game, and it is published October 2017. A new book, Shattered Mirror, will be published in 2018.

Mind Game focuses on Jane MacGuire who is back to Scotland to search for Cira’s treasure (more about Scotland is written in Hide Away). While she still dreams of Cira, her family, and the treasure she supposedly buried in Scotland, she is now also plagued by dreams of another young woman, this time the woman being Jane’s contemporary and probably still live. But not for long, unless Jane and Seth Caleb (Jane’s big love) can find her in time.

In the romantic thriller genre, Iris Johansen has written several additional series, the Catherine Ling series, the Kendra Michaels series (the second co-authored with her son Roy Johansen), the Hannah Bryson series, as well as the newer Alisa Flynn series, so reading the Iris Johansen books involves picking up the author’s other major works as well. And while you’re at it, why not also reading the Iris Johansen standalone novels as well? They are just as gripping and suspenseful as the author’s series.

Should We Read the Iris Johansen Books for the Eve Duncan Series in Order?

Reading the Iris Johansen books in order for her Eve Duncan series is kind of a must because the stories in the suspense novels interconnect, and more importantly, we get to see the development of the main character, Eve Duncan. In addition, the related series featuring Catherine Ling and Kendra Michaels should be also read in order since the main characters also appear more than once in the Eve Duncan books.

Having read all Iris Johansen books in order that have been published until today (including her Loveswept romance novels), I recommend you pick up all the books in the series starting with The Face of Deception and start reading.

There are so many threads in this popular series with the main characters involved that you won’t want to skip even a single book. Besides, the books are highly addictive. Just check out all the comments on this post to see just how much people enjoy reading it. Sure, there are 24 books (including the novella) so far, but it is a very easy series to read and it reads extremely fast. There were days when I’ve read an Eve Duncan book in one afternoon.

So yes, I fully recommend that you give the Even Duncan books and overall the Iris Johansen books – all gritty suspense novels – a serious look and don’t skip even one book because the threads are complicated and older ones pick up every couple of books once again.