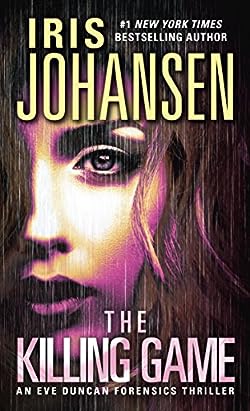 The second book in the Eve Duncan series (1999)

In The Killing Game, the second Eve Duncan book, the killer has his sights on Eve, the most prominent forensic sculptor who reconstructs faces of murdered victims. He also knows that Eve is still in pain from losing her daughter, Bonnie, whose body was never found. So the only way for him to drew her out to play is to lay for her a trap of temptation…what if the next child’s body is that of her own? Eve cannot resist, and so the games begin. And with it, the killer’s obsession with Eve. Because he is watching her every move, he is stalking her, calling her and feeding on her constant pain.