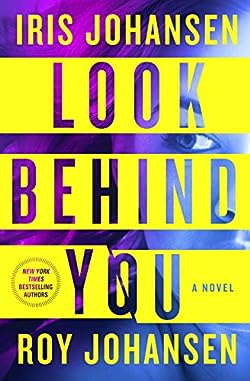 Kendra Michaels, a hired gun for the CIA and the FBI is back in this new romantic thriller, Look Behind You, by the mother and son author team Iris Johansen and Roy Johansen.

Kendra’s keen observation skills are once again required by the authorities baffled by the latest series of killings in San Diego. With each murder, the serial killer leaves a random object behind. The most baffling part of it is that these objects are in fact part of other previous murder scenes from all around the country. Could these different killings be related? And can Kendra stop the killer before he targets people close to her?

Because it seems that Kendra is the killer’s latest obsession, one which he has developed over several years. And now the killer is taunting Kendra and daring her to find him before more bodies pile up.