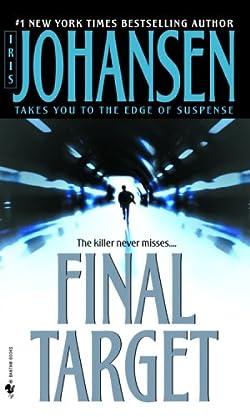 The fourth book in the Wind Dancers series (2001)

In the last Iris Johansen Wind Dancers romantic suspense book, Final Target, we meet the US President’s daughter, Cassie, who witnessed something so frightening that she is catatonic now. Thanks to the efforts of  Michael Travis, a questionable character in a questionable world, Cassie survives the attack, but she is left in a state of nonresponsiveness.

Dr. Jessica Riley is asked by the president to help his daughter, since, once upon a time, she also helped her sister, Melissa, from something similar. Soon, Jessica discovers something amazing about Cassie: she is catatonic, but she also has the ability to merge her consciousness with other people in the same catatonic state as she is.

The only two people who seem to be able to somehow help Cassie are Melissa and Travis. But Travis has a host of people after him who’d want nothing but seeing him dead, so he grabs Cassie, Jessica, and Melissa and takes them to Europe, hoping to get them out of harm’s way. But things not always go as expected…