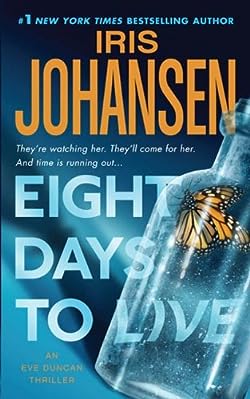 In Eight Days to Live, Eve Duncan and her adopted daughter, Jane Macguire, have to stand up to an ancient cult which decided that in eight days Jane will have to die.

When Jane displayed one of he paintings which she titled “Guilt” in an art gallery in Paris, she was not even sure why she painted that very face. But someone took notice and thus the ancient group wants to sacrifice Jane in exactly eight days from now.

Not to worry though, as Jane has not only Eve to protect her but also three very capable men: the Scottish MacDuff, the young Jock Gavin, and the mysterious and intriguing Seth Caleb who seems to have eyes only for her.