Last Updated on January 11, 2023 Angela Marsons is a British author who is known for her DI Kim Stone crime mystery novels. I came across her novels when I was searching Bookouture, the British book publisher for new reading ideas after having read Robert Bryndza‘s DCI Erica Foster series.

Here are Angela Marsons books in order for her beloved detective Kim Stone series. The book list will be updated with any new novels the author will be writing in the future. 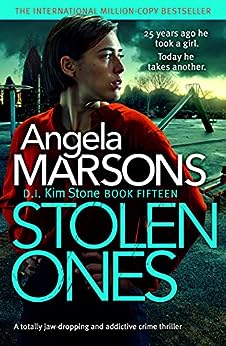 Who is Kim Stone?

Detective Kim Stone is the main character is Angela Marsons’ books. She is a very direct person who doesn’t suffer fools, and she can be quite rude if called for. Due to her difficult past, she has emotional issues and cannot connect easily to others, lacking social skills. At her core, however, she is a very straight shooter who wants to get justice for those who deserve it and can’t get it themselves, and can’t stand evil in any form or shape. She has a strong sense of integrity that she uses in her cases to solve.

While her past is very dark and horrible, she doesn’t like to speak about it, and she can’t stand being pitied for it. In fact, she has come to some sort of terms with her past, and she is ok with it and does the best she can with what she has available. When evil psychopath Dr. Alex Thorpe learned of Kim’s past, she exploited it as much as she could and almost brought Kim to a breaking point. Almost.

She hates her mother with all her heart for what she did to her, and she doesn’t know her father, as she has never met him.

Kim loves being a Detective Inspector (DI) and doesn’t want to climb the corporate ladder as she enjoys doing what she does, catching killers first hand and bringing them to justice.

One of her favorite past times when not working is restoring old motorbikes. She learned this from her fourth foster family, Keith and Erika, a middle-aged couple who treated her right. Keith was restoring motorbikes and Kim loved helping him.

Angela Marsons is a British crime thriller author who was born in 1968 in Black Country in the West Midlands in England, where she grew up and is currently also living in, and where her detective Kim Stone books are also set.

Her love of writing came to her during Junior Highschool when she realized that silently watching other students and making up fun stories about them is more interesting than focusing on her own homework. She wrote a short story titled “On the rocks and the seas”, which was positively reviewed.

During her younger years, Angela Marsons wrote many stories, which would invariably end in the desk drawer.  After a friend urged her to publish some of her work, she entered the Writer’s News competition with three short stories, one which ended in a win for the author.

It took Angela Marsons actually 25 years to get her short stories entered, as before she had to deal with heavy rejections. Publishing companies would always comment with “We love it… but not enough.”

Her first books were written character-driven stories about relationships, novels which she self-published under the titles My Name Is, and The Middle Child. Both books have been republished under the new title The Forgotten Woman and Dear Mother.  Eventually, she moved on to writing crime thriller novels, and the detective Kim Stone books lovers are extremely grateful for her switch to the genre.

After 19 years, Angela Marsons was made redundant from her job as a security guard manager at Merry Hill Shopping Center, so with money tight, especially since her partner, Julie, was recovering from a surgery at the time, she finally decided to become a full-time author. She is a writer whose dream finally came true.

Angela Marsons began writing her detective Kim Stone books in 2011 but they were rejected by all traditional publishing houses until Bookouture came along and made her an offer that shot her almost immediately to world fame.

When Angela does her research before writing a new story, she buys books on the topics and her research is always factual. She is never far from her PACE Manual,  which is the Police and Criminal Evidence Act manual and the codes of practice, along with several books on Forensics, and regularly checking the internet for factual information. I found it interesting that she also researched Archaeology, Osteoarchaeology, Post Mortem procedure, as well as various torture methods for her books.

Currently, her Bookouture contract started in 2014 consists of writing 8 books for them – and I sincerely hope the DI Kim Stone books will not end there!

Her first three books in the Kim Stone police procedural series were released in the same year, in 2015 and they all became Amazon top sellers in their category.  Book #4, Play Dead, was published in 2016. Silent Scream, Angela Marson’s crime thriller debut novel sold over 900,000 copies very fast and became an Amazon bestseller in position #1 for over a month in the UK and had a position of #5 on the US Amazon charts.

Her next crime thriller books also reached the Amazon top charts and Blood Lines, the 5th book in the detective Kim Stone novels, Blood Lines went straight to place #1 from the very beginning.

Dead Memories, another Angela Marsons book, was published early 2019. The book bought back some horrible memories from the time Kim and her brother, Mickey, were children and terrorized by their parents.

The prequel to the whole D.I. Kim Stone series that fans were so eagerly awaited is finally here with the title First Blood, published in 2019. The book takes us back to the early days of Kim working at the Halesowen Police Station after just having transferred from West Bromwich due to an issue with an officer she didn’t get along with. Now she and her team have gotten their first case together when the body of a man was discovered decapitated and also staked to the ground. The team is quite young, so they have their issues working well together, and also the case proves to be quite complicated, leading them to a specific women’s shelter that the victim had connections to. There is a serial killer on the loose, and detective Kim and her squad have to move fast before the killer strikes again.

Kim is a formidable character, with a lot of issues stemming from her past. She is not always very likable and sometimes sorely lacking social skills, but she is a very passionate person who is always driven to solve her cases. Kim had a hard childhood, she grew up in difficult conditions, was in an out of the care system, so she is quite compassionate towards those who have it harder than she has.

Also, she is not looking at prostitutes with the same eyes everyone else does. She knows that many of them have no choice or were forced to do what they are doing and can’t see any way out.

The Angela Marson books are not only serial killer thrillers but also psychological thrillers with very dark themes involved. They usually go deeper into the motivations of the killers and what drives them to do their awful deeds. Thus, reading the Angela Marsons novels in order is a must if you want to follow the character progression and her way of solving those dark crimes.

18 Responses to “List of Angela Marsons Books In Order”