Last Updated on March 15, 2022 The Sunday Times bestselling author M.J. Arlidge is a British crime mystery writer known for his Helen Grace British thriller series. Reading his books in order means delving into the crazy world of Detective Inspector, a series which right now is at book #11 with Cat and Mouse, released in 2022.

Here are the M.J. Arlidge books in order for his crime series and standalone novels, and this list will be updated with any other novel he will be writing in the future. 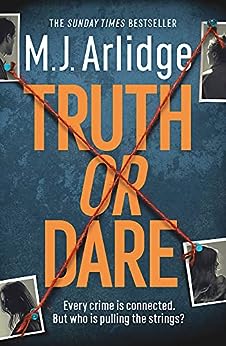 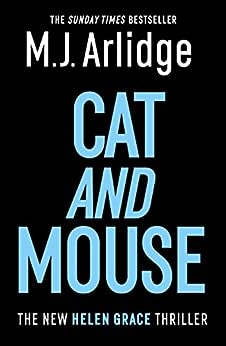 So far the reading order is the same as the publication order, except for the short novellas in between (e.g. No Way Back is a short story from the early years, and Running blind has Helen Grace fresh out of Police College, assigned to her very first case.)

About the Helen Grace Thrillers

Two people are abducted, imprisoned, and left with a gun. As hunger and thirst set in, only one walks away alive. Detective Inspector Helen Grace has faced down her own demons on her rise to the top. As she leads the investigation to hunt down this unseen monster, she learns that it may be the survivors – living calling cards – who hold the key to the case.

A murdered man is found in an empty house, and not much later, his heart is sent to his wife and children. Inspector Helen Grace arrives at the scene and she knows he won’t be the last victim. But why is a happily married man so far from home in the middle of the night? The media is talking about the inverted Jack the Ripper: a serial killer preying on fathers with double agendas. Helen sees the anger that radiates from the murders. What she does not anticipate is how unstable the perpetrator is – or what awaits her while working on this case.

Ruby wakes up in a strange room. Her captor calmly explains that no one is looking for her. No one wants her. Except him. Our detective is convinced that a criminal mastermind is at work: someone very smart, very careful, and worst of all, very patient. But as Helen struggles to piece together the killer’s motive, time is running out for a victim who is still alive…

There are six fires in twenty-four hours, resulting in two deaths and several injuries. This must be on purpose, and it looks like someone wants to burn the city to the ground. Grace and her team investigate the smoking rubble of the city. Where is the pyromaniac who has this on his conscience? Why is he making these victims? Anyone can be their next target.

When the body of an acquaintance is found in a nightclub, the murder investigation suddenly comes very close to Helen’s own life. She remains silent about her connection to the victim and works frantically to find the culprit. But should she talk about her private life or decide to lie to take the attention off herself?

Helen Grace was one of Southampton’s best detectives, but now she’s in prison herself, surrounded by the killers who brought her there. But then a mutilated body is found in the cell next to hers and Helen fears for her own life. There is a murderer in prison and she must find him before she becomes the next victim…

Early in the morning, a woman’s body lies on the side of a country road, and it seems like a tragic accident. When our favorite Detective Inspector arrives at the scene of the crime, it is immediately clear to her that it is cold-blooded murder. But why is this woman – a loving wife and caring mother – the victim? When a pharmacist is killed in the shopping center while he still had customers in his shop, Helen must use all her knowledge of the criminal brain to uncover the identity of the perpetrator before another victim falls.

Down to the Woods

First, it was the wild horses. Now it’s innocent men and women, hunted down and murdered by a faceless figure. Lost in the darkness, they try to flee, they try to hide. In desperation, they call out for help. But there is no one to hear their cries here… The arrow-ridden victims hang from the New Forest’s ancient oaks, like pieces of strange fruit. Why are helpless holidaymakers being targeted in peak camping season?

“You have one hour to live.” These are the only words received in a menacing phone call. Surely it can only be a joke… A mistake? A wrong number? Anything but the chilling truth… That someone is watching, waiting, working to steal a life in the space of an hour. But why? The task of discovering him falls to Inspector Helen Grace: a woman with a history of hunting murderers.

The city of Southampton is facing an unprecedented wave of violent crimes. Arson in a junkyard. A car robbery ends in tragedy. A murder in one of the city parks. Within the precinct itself, obstacles are piling up, putting to rest any progress in the investigation, while the pressure on Grace continues to increase. As the pieces of the puzzle begin to fall into place, revealing a skillful and perverse web of crimes, Inspector Grace is forced to face something that may be impossible to stop…

A silent killer stalks the city, targeting those home alone at night – killing without pity or remorse. As panic spreads, she leads the investigation but is herself a hunted woman, her every step dogged by a ruthless killer bent on revenge. As she tracks the murderer, Grace begins to suspect there is a truly shocking home truth that connects these brutal crimes…

M.J. Arlidge, aka Matthew Arlidge was born in 1974 in London, where he also grew up and attended the University College School between the age of 7-18.

His father, Anthony Arlidge, a QC (Queen’s Counsel) barrister had a major influence on the to-be author’s career due to him prosecuting several high-profile criminals, including Jeremy Bamber, who murdered both his parents.

After getting over his shock when following these trials, Matt became intrigued and also interested in the world of killers and how best to catch and prosecute them.

Before he went to college, he traveled quite a lot to countries such as Singapore, Australia, and India. After his return to the UK, he got an English Literature degree at St Johns College in Cambridge. Soon after enrolled at Bristol University to study Film and TV Production.

During this time won the Douglas Chivers prize for outstanding Shakespeare scholarship.

Before starting his fiction novel career, he worked in television production first as a story liner and later as a script editor at Eastenders, the popular BBC1 TV series, basically focusing on high end drama production. After he left Eastenders, he went to work for  Ecosse Films, a British Film and TV production company, where he lined and edited the TV show that the company produced called Monarch of the Glen. Soon he was promoted to the job of TV development producer where he worked on shows including  Mistresses and Cape Wrath.

In 2007 M.J. Arlidge decided to work for himself for once and created TXTV Limited, a production company working on his own, where he created successful TV shows such as Torn, The Little House and Undeniable.

During the last few years, he worked on several crime thrillers for the ITV, while currently, he is working on a BBC adaptation of the book The Last of the Mohicans. In 2015 he wrote a 10 part thriller for the major audiobook company called Audible called Six Degrees of Assassination.

The first book by M.J. Arlidge, Eeny Meeny was published in 2014. This was the author’s UK’s bestselling crime debut novel. The book turned out to be the first in the DI Helen Grace series, featuring the tough, slightly enigmatic detective who solves the hardest cases involving serial killers of the worst kind.

In an interview, the author MJ Arlidge admitted that he choose the name of his main character because…

she is constantly seeking redemption – a state of Grace – that she will never achieve.

The detective Helen Grace series follows Helen, a detective inspector in England who is battling her past demons that still weigh heavily on her. Helen is cold, unapproachable and highly enigmatic with lots of secrets tucked away. Secrets which would not only get her kicked out of the force but more. At the same time, she is also very good at her job, doing what she knows best to do: solve cases and put murderers behind bars.

As the Helen Grace thriller series continues, we get to learn more and more about Helen, what makes her tick and why she is the way she is.

As I mentioned before, Eeny Meeny by M.J. Arlidge is the author’s debut novel, where we are first introduced to the enigmatic detective who is tasked to find and stop a ruthless serial killer who plays the well-known children’s game eeny meeny moo while abducing pairs of people with some dire consequences.

We first learn here about detective Helen Grace’s demons she is battling, a bit of her past and the secrets she is trying desperately to hide from her peers.

In The Doll’s House, DI Helen Grace has again a very difficult case (she seems to be getting only the toughest of cases) where another sick killer kidnaps similar-looking young women, leaves them to starve to death and then disposes of them in various locations. We learn again a bit more about Helen, what drives her and why her past is so twisted as it is.

In Little Boy Blue, Helen has to investigate a case that is very close to her heart. A body is found at a bondage club, and Helen seems to have known that person quite well. This is why reading the M.J. Arlidge Helen Grace books in order is so important. I can’t reveal more about this book without spoilers because this particular book goes back to a previous novel in the series and Helen’s personal hidden life.

Hide and Seek is the sixth book in the Helen Grace series by M.J. Arlidge, and here we find Helen sitting in prison for a crime we all know didn’t commit. She was framed and now she has to suffer the consequences of her previous actions.

Not only that, but knowing Helen, she can’t stand idle, so while her colleagues are trying to desperately prove she was innocent of the crime, Helen is also working on a case of her own. Helen works against the clock to solve the puzzling murders. An inmate was killed and Helen wants and needs to find out who the killer is.

The M.J. Arlidge books are a joy to read for anyone who loves suspenseful and thrilling crime mystery novels featuring a tough and troubled heroine.