Last Updated on August 7, 2020  Reading the Mark Billingham books in order means catching up to the British author’s Tom Thorne series. There are currently 15 main books and a short novella in the series, which will be listed in order of publication below. 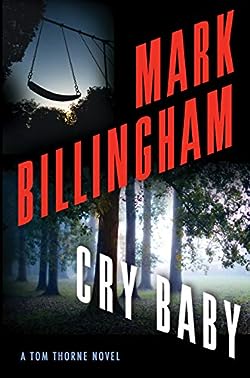 Born in 1961 in Solihull, Warwickshire, Mark Billingham grew up in Birmingham. As a child, he went to the King Edward VI camp high school, a boy’s grammar school.

At the university, he graduated in drama, after which he co-founded a theater called Bread and Circuses.

In the 1980s he moved to London where he currently lives with his family. In 1987 he decided to follow a career in comedy before becoming a full-time writer. Folks in the UK might know the author as an actor, a stand-up comedian, as well as a TV writer.

In addition to his Tom Thorne series, Mark Billingham has also written other books, including several standalone thrillers, two out of which are being adapted for television by the BBC.

He has also written another series, this time a thriller series for young adults called Triskellion trilogy, under the pseudonym Will Peterson (co-written with Peter Cocks).

I first got introduced to the works of Mark Billingham when I received the very first book in the Tom Throne series, Sleepyhead, as a birthday gift from my mom.

She knows how much I love reading, and knew that I would enjoy reading a new crime mystery series, especially when starting with the first book. As you know by now, I’m a stickler for reading the books in order rather than randomly as I get my hands on them.

His first book in the Tom Thorne series left a strong impact on me, and I think this is where I really developed a strong love for British crime novels.

So should you read the Mark Billingham books in order for his Tom Thorne series? Well, I do believe so.

Each book in the series revolves around a case that is solved by the end of the book. However, if you get to like the rather flawed (damaged as some call him) character of Tom Thorne, you will want to follow his progress and learn more about him, without skipping a book here and there.

Not a big deal if you do, but for the sake of continuity, you might want to read the Mark Billingham books in chronological order.