Last Updated on September 3, 2019  The Peter Robinson books in order are mostly about the popular Inspector Banks series, which currently includes 26 books with the latest one published in 2019 titled Careless Love.

Here are the Peter Robinson Inspector Banks books in order of publication (along with the chronological order of each book released). The series is set in the fictional English town called Eastvale. 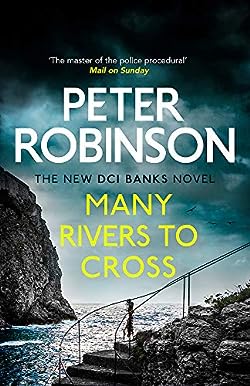 Should we read the Peter Robinson books in order?

Each story in the Inspector Banks series is separate from the rest, however as usual with crime and mystery series, to get the most out of the character development, it is best to read each book in publication order.

This is incidentally also the chronological order, except for the two short story publications. It should be started with Gallows View, working your way up to Children of the Revolution, and then Abattoir Blues when the latest book got released in the bookstores.

While Peter Robinson is best known for his DCI Banks series, the author has also written additional standalone novels. Here they are listed in order of publication.

Peter Robinsons was born in Armley, Leeds, in England in 1950. He grew up in Yorkshire, where his Inspector Banks series is also set. After getting his BA in English Literature at the University of Leeds, in 1974 he moved to Canada, where he got his master’s degree in English and Creative writing from the University of Windsor.

Next, he moved back to the UK but couldn’t find a job teaching, so he went back to Canada and got a Ph.D. in English at York University in Toronto. It was much easier to find jobs in Canada, so the author would go back and forth between the two countries until he would eventually fully settle down in Canada.

Before writing his Banks series, he wrote poems and published his own work. When, during one summer, he went back to Yorkshire, he found his father reading a Raymond Chandler book. Next, he picked up many different British crime books by various authors, and he was hooked. He started writing as well, but the first three books were duds. Then he wrote A Dedicated Man (a book which became book #2 in the Inspector Banks series) and soon Penguin in Canada picked it up, along with the rest of the series.

Peter started writing his DCI Banks books series in 1987, and so far he has currently 24 books written, with a latest one published in 2017 with the title Sleeping in the Ground.

So who is DCI Banks? The Peter Robinson books have at center DCI inspector Alan Banks, an over-30-year-veteran policeman who moved to the fictional town of Eastvale near Yorkshire, after getting tired of the big city life, having been an inspector at the Metropolitan Police in London before. Some of the books in the series have been adapted to a TV show that started in 2010, The Inspector Banks cast features Stephen Thompkinson in the main role.

While Peter Robinson is best known for his Inspector Banks series, he has also written a few other works non-related to it. One of the books that I enjoyed reading by him was a standalone novel (published in 2011) with the title Before the Poison.

The way Inspector Banks was born was through Peter Robinson reading many crime novels set in England in the 1980s with detectives working cases at the police station. Thus, he figured that a new crime mystery series set in Yorkshire, the place where he grew up, would be enjoyable to British crime mystery readers.

When he started the DCI Banks, the author was already living in Canada, however, he was still nostalgic for the UK of his past. He also knew his home country much better than his new uprooted country back then.

Several of the books in the series take their plots from real life crimes that were reported in newspapers but which are incomplete in their storylines. The author takes the stories and through his creativity, takes the plots to new interesting directions.

In an interview, Peter Robinson mentioned that in order to write successful crime mystery novels, you need to have a morbid imagination which leaves no space for squeamishness.

Besides writing his Inspector Banks series and standalone novels, he is also teaching crime writing at the University of Toronto’s School of Continuing Studies.

Several of his Inspector Banks novels have won awards, including the Anthony Award, the Arthur Ellis Award, the TORGI Talking Book Award, the Macavity Award for Best Short Story, the Barry Award, the Swedish Martin Beck Award, Spoken Word Bronze Award, CWA (UK) Dagger in The Library Award, and have been nominated for the Agatha Award. The book In a Dry Season has been a New York TimesNotable Book.

The author currently lives in Toronto with his wife. Often, it is easy to forget that the author is now Canadian, and not British. His books are often likened to those of Ian Rankin and other similar British crime mystery writers, and with good reasons. Nobody ever likens him to Canadian authors.