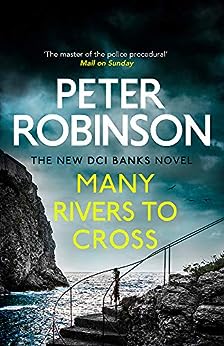 Peter Robinson a “master of the police procedural” (Mail on Sunday) returns with the twenty-sixth instalment of the #1 bestselling Inspector Banks series.

When the body of a teenage boy is found stuffed into a wheely bin on the East Side Estate, Banks and Annie have a homegrown murder case to solve. But Banks’s attention is also on Zelda, who in helping him track down his old enemy, has put herself in danger and alerted the stonecold Eastern European sex traffickers who brought her to the UK.

In Eastvale, a young Middle Eastern boy is found dead, his body stuffed in a wheelbarrow on the East Side Estate. Detective Superintendent Banks and his team know they must tread carefully to solve this sensitive case. But tensions rise when they learn that the victim was stabbed somewhere else and dumped. Who is the boy, and where did he come from?

Then, in a decayed area of Eastvale scheduled for redevelopment, a heroin addict is found dead. Was this just another tragic overdose or something darker?

To prevent tensions from reaching a boiling point, Banks must find answers quickly. Yet just when he needs to be his sharpest, the seasoned detective finds himself distracted by a close friend’s increasingly precarious situation. He needs a break—and gets one when he finds a connection to a real estate developer that could be key to finding the truth.

With so many loose ends dangling, there is one thing Banks is sure of—solving the case may come at a terrible cost