Sue Grafton is the American author of the popular Kinsey Millhone crime mystery series, which is known even by those who haven’t read the books yet by the fact that each book starts with a letter of the alphabet.

Sadly, the author Sue Grafton passed away on December 28, 2017, at the age of 77 from a 2-year battle with cancer of the appendix, one that she lost. Thus, the Sue Grafton latest book is also her last with Y is For Yesterday to become the last crime mystery novel ever written.

Born in 1940 in Louisville, Kentucky, Sue Taylor Grafton (website) is the daughter of the lawyer and detective mystery author C.W. Grafton who wrote 4 books during 1943-1950.

She grew up in Louisville where she attended and graduated from the Western Kentucky University in 1961 with a Bachelor of the Arts in English literature, as well as minors in fine arts and the humanities.

After her university graduation, she held various jobs, including that of being a hospital admission clerk, a cashier, and medical secretary.

At the age of 18, Sue Grafton started writing, with her first novel completed at the age of 22, four years later. In total, before her Kinsey Millhone series, there are seven Sue Grafton books (manuscripts really), two of which were published. As she couldn’t hit success with her books, Sue Grafton turned to TV and she spent 15 years writing scripts for TV films, including two Agatha Christie film adaptions.

Her long-term work with writing for TV taught her a lot in how to structure a story, how to write proper dialogue and how to create action sequences, all knowledge which she put to good use in her later successful crime series, which started with her 8th book, A Is For Alibi. That very first Kinsey Millhone book was Grafton’s ticked out of Hollywood and marked her entry to the big league of prolific crime mystery writers.

During that time she went through a 6 year long bitter divorce and custody battle, and apparently, some of the gruesome ways the serial killers terminated the lives of their victims in her books were conjured during those dark years when she fantasized of ways to kill her own ex-husband. Thankfully those fantasies ended up being written down and became part of the successful Kinsey Millhone crime mystery series, which has so far been published in 28 countries and translated into 26 languages all over the world. 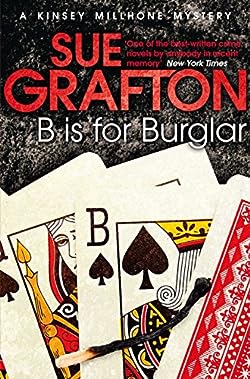 The Sue Grafton A is For Alibi novel was the beginning of the popular Kinsey Millhone series and it was started in 1982.

However, the author never wanted her books to be brought to the big screen or turned into a TV series any further, and neither did she want them to be continued by a ghost writer like, for example, Tom Clancy had done with his Jack Reacher series, so the Sue Grafton legacy remain with what she has written right up till she passed away.

The Sue Grafton series focuses on Kinsey Millhone, a former police officer now licensed insurance investigator and PI, who lives in Santa Theresa, California where she solves crime after crime. She has issues dealing with the red tape of bureaucracy and she loves reading books, just like the author used to do.

A new, last Kinsey Millhone book was intended to be released in 2019 with the title Z is For Zero, however, while the author did have a working title for the book, it was never finished.

The author’s very first words in the A is For Alibi, will forever remain for posterity:

My name is Kinsey Millhone. I’m a private investigator, licensed by the state of California. I’m thirty-two years old, twice divorced, no kids. The day before yesterday I killed someone and the fact weighs heavily on my mind.

Sue Grafton leaves behind her third husband, Steve Humphrey, to whom she was married for more than 35 years, three children, four granddaughters and one great-grandson.

Jamie Clark, the writer’s daughter, mentioned on Facebook shortly after her mother’s passing:

The alphabet now ends at Y.

So why did Sue Grafton write ABC books? In an interview, the author mentioned that the idea for an alphabet series was inspired by her reading The Gashlycrumb Tinies by Edward Gorey, a macabre rhyming book written in 1963 where 26 kids end in different gruesome ways. She was enthralled by reading the way all those kids met their ends in horrible but creative ways. That old book started with

A is for Amy who fell down the stairs; B is for Basil assaulted by bears; C is for Clara who wasted away; D is for Desmond thrown out of a sleigh.’ Edward Gorey was deliciously bent.

and this idea sparked in the author the idea for the Sue Grafton Kinsey Millhone mystery books, which ultimately became her legacy.