Last Updated on May 12, 2022 Here are the James Lee Burke books in order of publication release date next to the series number for his Dave Robicheaux, and the Texas Sheriff Hackberry Holland and family stories. With books like Sunset Limited, The New Iberia Blues, The Tin Roof Blowdown, Black Cherry Blues, Jolie Blon’s Bounce, and Wayfaring Stranger, the author has made himself a name not only in the U.S. but also around the world among anyone who reads crime mystery novels. 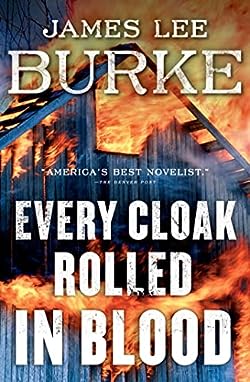 Other Books By James Lee Burke

While being a novelist is what we know him for best, he also had some interesting and odd jobs over the years, including being a land surveyor, pipeliner, reporter for a newspaper, college professor in English, a clerk, and social worker, to name just a few.

James’s books have received several awards, among others twice the Edgar award for best crime novel of the year. Heaven’s Prisoners and Two For Texas have been turned into movies.

For those authors who get discouraged by their books being rejected by publishers, here’s an interesting tidbit. His novel The Lost Get-Back Boogie was rejected for a total of 111 times before it was finally published by Louisiana State University Press. The book was nominated for a Pulitzer. Lesson to take away: never give up.

The author’s daughter, Alafair Burke is also an established crime mystery writer with two main series (Ellie Hatcher and Samantha Kinkaid). Her books are also worth checking out.

The journey to read the James Lee Burke books in order will take you through over 40 novels he has written over many decades, including 3 main series, with the most popular one being Dave Robicheaux.

I have to admit, I love the Dave Robicheaux tales the most, however, I know many readers enjoy his other stories, including his standalone novels as well. A New York Times bestselling novelist, James also wrote two short story collections that are worth reading. The Convict, released in 1985, features a dozen short tales set in the Deep South. Jesus Out to Sea, published in 2007, has an additional 10 American gripping tales. These two collections are well worth reading as well.

Needless to say, however, Dave Robicheaux, which currently consists of 22 published, with the latest book, The New Iberia Blues, released early 2020, is highly recommended if you like Southern mysteries with heavy baggage recovering alcoholic sheriffs solving murders in their own personal way.

If you’re new to the series, you might also want to check out the two movies made based on the novels, one with Alec Baldwin (called Heaven’s Prisoners) and the other one with Tommy Lee Jones (Electric Mist).