Last Updated on June 7, 2022  Karin Slaughter is a favorite author and New York Times bestselling author of two popular thriller series, Will Trent and (my favorite) Grant County book series, Good Daughter series, and andrea Oliver series. While the two main mystery series are distinct from each other, in 2009 the author linked them through the book Undone (Genesis in the UK), so right now we have 2 main series and a third one unofficially called the Genesis series.

Here are the Karin Slaughter books in order for her series and her standalone novels. 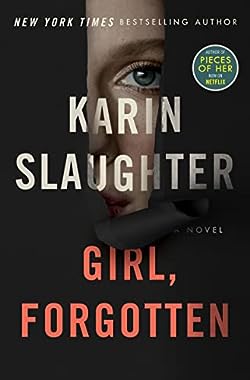 Karin Slaughter was born in 1971 in Covington, Georgia.

As a child, Karin Slaughter was always interested in dark things. In one interview she once mentioned that she got kicked out from a Christian school because she tore the Bible apart.

She was usually a loner, spending lots of her times reading and one of her dreams was to write books from a very young age.

After graduating from Morrow High School, she attended Georgia State University. Following her graduation, Karin worked several jobs, including being a designer and sales rep for a sign company. After leaving that company, she started her own sign business.

Before writing her first successful novel, she wrote several manuscripts which didn’t sell. Her debut novel, Blindsighted, was nominated for the Dagger Award, Barry Award, and the Macavity Award.

The Karin Slaughter books have so far sold over 35 million copies all over the world and have been published in over 35 languages.

Her stories are all gruesome and the crimes are not simply glossed over. Her thriller genre is one that cuts to the chase and shows every horrible detail in all its glory.

I’ve read her books in order right from the start. I’ve been introduced to Karin Slaughter through Blindsighted in 2001, her very first novel.

It is also the first in the Karin Slaughter books in order for the fictional town Grant County novels, a forensic mystery series set in Georgia focusing on three main characters: Sara Linton who is the local pediatrician and also part-time coroner, her ex and current husband Jeffrey Tolliver and another strange character named Lena Adams, who is working for Tolliver. The series has 6 books with the last one written in 2007.

The second series, Will Trent, takes place in Atlanta alternating with Georgia (some books in the series are also called the Georgia series) and has as main characters the FBI agent Will Trent, Faith Mitchell who is his partner, and Angie Polaski.

Later on, through the connecting novels, Sara Linton the main protagonist of the Grant County book series also joins forces with them in a few following books including Undone, Broken, Fallen, Snatched and Criminal.

The author’s third series is called Good Daughter and the first book titled The Good Daughter is published in 2017 along with a short prequel called Last Breath. All the Karin Slaughter books are based in Georgia.

In addition, Karin Slaughter has written several novels and short stories, all as standalone books. Her latest short story is Last Breath, published in 2017, as part of the Good Daughter series.

When she began writing The Good Daughter, Karin Slaughter considered it to become a standalone novel. However, she also wrote a short story the same year, which hopefully means that the series will become fully fleshed out with additional books. The first main book is about two sister whose life gets shattered in the very first few pages of the book. It is more a psychological thriller with lots of twists and turns.

The author’s popular standalone novel, Pretty Girls, is a powerful psychological novel that touches on strong human emotions based on loss of one’s daughter and how the family is torn up after the crime.

Another one of her popular standalone novels, Pieces of Her, follows a young woman who learns about a hidden side of her mother Laura. The book reached number 2 on the New York Times Bestseller list in 2018 during the same week it was first released.

While most of the Karin Slaughter books in order deal with the detectives working on solving cases, this particular novel is shifting points of view, this time working through the family’s anguish and the whole community working through what happened around them. In this book, the main protagonists are not police detectives and seasoned investigators. They are just regular, average people. This book is much more character-driven than the author’s previous works.

As usual, Pretty Girls is also infused with a bit of gore, bordering on horror, with graphic- and grizzly descriptions of the crime scenes and deeds.

The Kept Woman is a favorite in the Karin Slaughter Will Trent books, in which the Georgia investigator is brought in to check out a case where the victim is a dirty ex-policeman who was found at a construction site belonging to a basketball start whom Trent investigated for rape, and the guy walked. What Medical Examiner Sara Linton discovers is that there supposedly was a second victim who fled the building. And based on the signs, the woman doesn’t have all that long to live.

The book is a worthy continuation to the Will Trent books in order, however, before you pick up The Kept Woman, make sure to read the series in order starting from Triptych, else many things might not make a whole lot of sense. The Karin Slaughter book list is there for a reason, especially for the author’s two main series.

Reading the Karin Slaughter books in order is a must both for the Will Trent novel series, the Grant County book series, as well as the shorter Good Daughter series. Her standalone novels can be read in any order you choose. In terms of her short story collection, they are easily comparable with the rest of Karin Slaughter’s books.

Currently, Karin Slaughter lives in rural northern Georgia where she is working on her next book.