Last Updated on June 17, 2022 Jeffery Deaver is one of the most popular contemporary thriller authors who brought us the well-known Lincoln Rhyme series. Reading the Jeffery Deaver books in order involves picking up this book series and a few other shorter series as well plus several standalone novels.

Here are the Jeffery Deaver books in order for his popular Lincoln Rhyme series, the Kathryn Dance series, the John Pellam series, his Rune trilogy, the new Colter Shaw books, and other novels he has written, including his popular Amazon Original Stories short story collection, based on the publication order. The book series order is listed in brackets for each of Jeffery Deaver’s series. 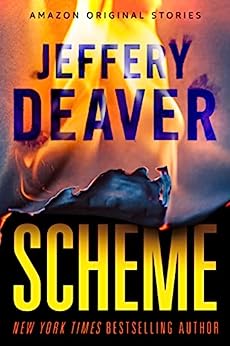 Who is Lincoln Rhyme?

Lincoln Rhyme is the best-known character among the many the author Jeffery Deaver has written about so far. He is a brilliant Forensic Criminalist Consultant with the Dept. and a former NYPD Homicide Detective who changed jobs due to physical reasons. After being involved in an accident at a crime scene where an oak beam fell on him, which ended up crushing his  C4 vertebrae, it also left him paralyzed from his shoulders down, effectively making him quadriplegic. Except for his very upper body, he can only move his left ring finger.

He is first introduced in The Bone Collector, which teams him up with Amelia Sachs, a 31-year-old police officer who gets involved in the case and basically becomes Lincoln’s ears, eyes, brains, and fingers on the crime scenes. Ever since then he has been confined to a bed, equipment and manual care by others in order to survive.

Just before their first case together, Lincoln Rhyme was actually contemplating suicide with the help of Dr. William Berger, who is a pro-euthanasia doctor. Thankfully for this case and Amelia, our main character got to live for many books more so the two can solve many homicide crimes.

In the first main case, Lincoln is visited by his former partner, Lon Sellitto, who needs help with a puzzling case where two people have been kidnapped. One is alive and the other one is still missing. Initially, Lincoln has no major interest in the case since he is busy with ending his life, but soon he gets hooked on the case details against his own reluctance.

In the Lincoln Rhyme books, as the story progresses, Lincoln Rhyme and Amelia Sachs not only form a work-related partnership but also a real relationship.

The Lincoln Rhyme character was soon introduced to the big screen in a movie from 1999 titled The Bone Collector, which featured mostly the plot from the first book. It is one of the finest mystery thriller books and crime stories to be transferred to the cinema.

For those unfamiliar with Jeffery Deaver’s works, this debut novel should be a great introduction to immerse yourself into the world of this wonderful author.

Jeffery Deaver was born in 1950 in  Glen Ellyn, outside Chicago, Illinois. He attended the University of Missouri from where he obtained a bachelor degree in journalism, after which he worked as a magazine writer for a bit, before returning to study law at the Fordham University in New York City.

After getting his law degree, he worked as a corporate lawyer on Wall Street.

In his spare time, however, he kept on writing and trying to get his books published. After several rejections (or self-terminations due to the author realizing that what he wrote were not up to par), his next work, Hoodoo, got accepted by a smaller publisher. His next book, Always A Thief got accepted eventually as well.

Over time, however, Jeffery Deaver changed the way he wrote books. He even admits these days that he’s not overly fond of his earlier creations and he doesn’t mind if those books are continuously out of print (in fact I haven’t been able to find a copy of either of those early novels, no matter how much I searched. Still not giving up…)

Reading the Jeffery Deaver books in order is a real treat for every FBI-style thrillers reader. The author has written close to 30 novels which have been translated into 25 languages and were sold in over 150 countries. My first encounter with his books was with his debut novel, The Bone Collector. Needless to say, I was hooked.

It was published in 1997, and two years later the overnight hit movie with the same title featuring two of my favorite actors, Denzel Washington and Angelina Jolie played in theaters. I have to say, the actors did a good job transplanting what the book had to offer to the big screen. 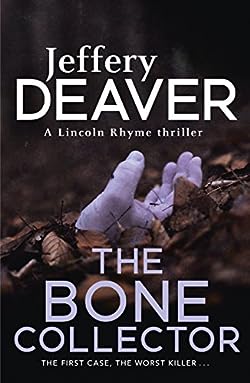 His first serious debut novel, The Bone Collector, and probably the best of Jeffery Deaver’s novels, was not intended to become part of a series. But I’m glad it did because Lincoln Rhyme is one of the most interesting characters I met in books.

A quadriplegic from the very first book, he is up against the most ruthless of criminals, and only his sharp wits and his above-average mind and intellect helps him solve crimes after crimes from a physical impairment position where most people would give up on the world and will to live by now.

In Coffin Dancer, the story of the main character and Amelia Sachs continues with a more harrowing case.

In the newer Jeffery Deaver book, The Cutting Edge, which is book #14 in the book series, Lincoln Rhyme and his bride and partner, Amelia Sachs, return from their honeymoon in Italy just in time to realize that their home city, New York, is under terror by a serial killer. Newspapers and media called him Fiancé Killer and as usual, the name stuck.

The killer’s MO is following newly engaged couples to jewelry stores and killing them before they get the chance to actually buy the wedding ring. When the killer escapes once again, the police asks Lincoln to kindly lend a hand and his unbeatable forensic expertise in catching the monster roaming the New York City streets.

But the closer Lincoln and Amelia get to the killer, the nearer he gets to them. Now, the couple has to stop them before their lives are stopped…for good.

The new Colter Shaw books starting in 2019 features private investigator / excellent tracker/problem solver guy who, in The Never Game, is tasked by a man to find his missing daughter. Shaw is perfect for the job since, as the son of a survivalist family, he has uncanny tracking abilities, and he puts those to good use while he is traveling across the country to solve cases that need his particular flavor of expertise.

Soon, however, a second victim goes missing, and all signs point to a particular video game which has as topic survival in unfriendly places after being abandoned there. Could there be a connection between the two cases and to the said video game?

The book series starts with the short novella, Captivated, which introduces us to Colter Shaw, where he is already working the case of a missing woman who might have fled from her husband and gone to a retreat in Indiana. But the more he investigates, the clearer it is that things are a bit more complicated than initially anticipated.

Jeffery Deaver has also started writing a set of short story collections, especially for Amazon, all crime stories of around 60 pages each. There are also several Lincoln Rhyme short stories, including one with Lincoln Rhyme vs Lucas Davenport, titled Rhymes with Prey. The short story was initially included in the Face Off collection. These stories are also part of the Lincoln Rhymes books, albeit very short.

The author also contributed to the James Bond Extended series with Carte Blanche, a novel published in 2011. The series original was written by Ian Flemming, and then was continued by authors such as Robert Markham, John George Pearson, Christopher Wood, Raymond Benson, and John Gardner, who wrote several novels in the series.

The Jeffery Deaver books have appeared on several bestseller lists around the world, including The New York Times, The Times, The Sydney Morning Herald, Corriere della Sera in Italy, and The Los Angeles Times.

Jeffery Deaver was nominated for and has received several awards over the years, including:

Currently, three Jeffery Deaver books have been turned into movies:

3 Responses to “List of the Jeffery Deaver Books In Order”