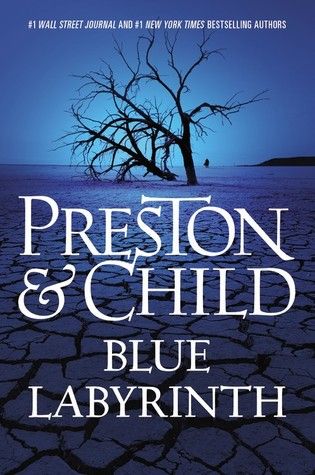 Blue Labyrinth is the 14th book in one of my favorite thriller series ever, featuring Special Agent Pendergast. I got hooked on this series when I read the first book, Relic, many years ago. It was something out of this world, it was so good.

The second book, Reliquary was just as good, and the third offering in the series, Cabinet of Curiosities, was close to the greatness of the previous two novels.

And then something happened. The next 10 books were great reads, but I never again had that feeling of total enjoyment that I initially had when I started reading the Pendergast series.

The stories became more mainstream and they sort of lost that spark.  Pendergast became kind of dull, and rather absent in many of the following novels. The books became average thrillers or crime mystery novels. And I was not the only reader to feel that something was missing in these books.

Having read Blue Labyrinth, I am in awe again. This book went back to its roots. Went back to being one of the best offerings in the Pendergast series. It was a chilling, thrilling and a very rewarding read. Because…

If I had to count my top 5 favorites in the series, Blue Labyrinth would be #4. And now that the authors are back to the top of their game, my only wish is this – please keep writing books in the style of Relic, Reliquary, Cabinet of Curiosities and Blue Labyrinth. These are the books your readers love you for, and these are the books that make the series so special.

In Blue Labyrinth, Special Agent Pendergast has to deal with a very serious and close to a heart problem. One of his biggest and most fierce enemies ever (if you don’t count his brother Diogenes) is back. However, he is no threat to Pendergast anymore, because he is dead. Nicely wrapped and delivered straight to the special agent’s doorsteps.

This in itself is strange enough, however, when during the autopsy a turquoise stone is found in the dead man’s stomach, Pendergast knows that something really weird is going on and he has no choice but to go after the killer of his enemy because he knows that there is no other way.

I don’t want to spoil it by saying who the enemy is, but suffice to say that Pendergast is very close to him, even though they are mortal enemies. And this is why Pendergast is so torn between the need to solve the crime and his feelings of utter disdain and hatred towards the now dead man.

While he is working on solving the murder, he also gets involved in a crime committed in the very museum everything started years ago (in the book Relic). It was very satisfying to meet again characters of the past and to walk again the steps of the museum where so many horrible things happened a long time ago. The very museum that got us hooked on the series in the first place.

His friend, the cop Vincent D’Agosta is the one who has to solve the museum case, but he is quite happy to have Pendergast along to help.

Pendergast soon realizes that the two cases are connected, so now he needs to travel to several places throughout the world, including a far away and hidden dangerous mine, Brazil, and Switzerland, to find the answers he is seeking. And the answers are not pretty at all.

Along the way, he gets deadly poisoned, and it takes the strong wit, courage, and knowledge of his friends (Vincent, Margo and especially Constance) to save him from a sure death.

The story is full of suspense and there are a few sub-plots that come full-fledged together in the end.

What I loved most is that this book is all about Pendergast. Everyone is second or third, which suits me well because I truly missed a real Pendergast novel. Too often he was only a side-dish served rather cold, instead of being the delicious main course. And boy delicious he was in here!

Besides Pendergast, I bet most readers of this series also love Constance. The mysterious and elusive Constance.

Finally, Constance is not just a shadow – a mirage almost, but a strong ally to Pendergast. A strong character who is only afraid of one thing: of losing her only love, and will do anything it takes to save him. And the things she does almost blew my mind away.

Overall Blue Labyrinth is a roller-coaster of a read that we’ve really missed in the last couple of novels. So thank you Douglas Preston and Lincoln Child for getting back to the roots of the series and offering us what we’ve been waiting for many years now: a heck of a read, a pure delight to savor.