Last Updated on September 13, 2021 Karen Rose books in order all fall under the umbrella of the Romantic Suspense Series (yes, it is a series, not only a genre). However, they can be further classified based on their location (Chicago, North Carolina, Cincinnati, etc).

Karen Rose is one of my favorite romantic suspense authors. I’ve been reading her books ever since I came across her first novel Don’t Tell back in 2003 when I got hooked on her stories.

Here are all the Karen Rose books in chronological order with the additional information listed next to each book. 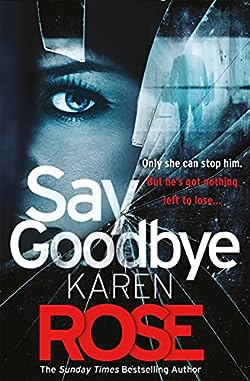 Karen Rose, the popular international romantic-suspense author, was born as Karen Rose Hafer in 1964 in Baltimore, Maryland, where she also grew up. At the age of 17, she met her future husband with whom she moved to Cincinnati, Ohio after both graduating from University of Maryland. Karen graduated with a degree in Chemical Engineering.

Before writing books, she worked as an engineer for a large consumer goods company.

Here, however, she could not stop thinking about plots and books she would write. So, Karen Rose began writing all her ideas on paper. Thus, her debut novel, Don’t Tell was born.

Several of her novels received the Romance Writers of America’s RITA award for Best Romantic Suspense, and all her books have been so far translated into over 20 languages. Her books have been featured on various bestseller lists, including the New York Times, USA Today, London’s Sunday Times, and Germany’s Der Spiegel.

All of her books are romantic suspense, a genre that I enjoy reading when I want to pick up something lighter than the hardcore thrillers and crime mysteries I usually spend my time with. Her latest book, Edge of Darkness is so far the only one that I still have on my TBR shelf to read in a couple of weeks. I’m pretty sure that it will be just as good as previous Karen Rose novels that captured my attention from their first page.

Edge of Darkness is the last book in the Cincinnati series, which totals four books. The two main protagonists are Adam Kimble, a homicide detective, and Meredith Fallon, a child psychologist. The two had a relationship in the past, but that was quite brief. Now, their paths cross again and they both discover that their feelings for each other are just as strong as they were before.

Meredith’s job takes her to work with children abused sexually. When she is out celebrating her success with one of her patients, someone is trying to shoot her, but she comes out unharmed from the affair. The question is, who wants to shoot Meredith and why? Of course, there is Adam who wants nothing more than protecting Meredith with his life.

Both Meredith and Adam are “damaged goods” (some of the previous Cincinnati books go more in-depth into it) and, somehow, they manage to have deep feelings for each other. These feelings might just be what saves them both.

With Say You’re Sorry, Karen Rose starts a new mini-series, this time set in Sacramento. It features Special Agent Gideon Reynolds and Daisy Dawson who get entangled in a new deadly game where a killer from the past intends to make Daisy his newest victim.

Should we Read the Karen Rose Books in Order?

Having read pretty much all of the Karen Rose books (except for the last one and a novella), I can safely say yes, it’s best to read the Karen Rose books in the proper order. The reason is that there are several characters appearing in various novels and they don’t always correspond to the location/book setting.

If you read them out of order, you might find yourself lacking in a few background details that make reading the books so much more entertaining.

Sure, you can read them as you get them as well, but your enjoyment will not be as full, simply because some books nicely wrap up events that have taken place in previous books in the various location series (e.g. the Baltimore series, etc).

Classifying the Karen Rose books in order is not as easy as it seems, because there are various characters that appear in several novels, and there are also place relationships between books.

For example, some of the Karen Rose books are set in Minneapolis, others in Baltimore and yet others in Atlanta, Cincinnati, and Chicago.

For all intents and purposes, I think the best way to classify the books are based on the location/setting. In addition, the books are listed in chronological order, with the publication date listed in brackets at the end.

Have you read any of Karen Rose’s books and if yes, what did you think of them?