Last Updated on July 9, 2021 Reading the Brad Thor books in order is easy, as it only includes his Scot Harvath thriller series. However as the Scot Harvath series has over 20 books so far, it would be useful to organize the series in proper reading order, as it is a distinct continuity to the books in the series.

Here are the Brad Thor books in order of publication, which also coincides with the chronological order of events in the books.

Do note that some readers consider The Athena Project part of a separate series (that includes only one book), while others take it as part of the main scot Harvath series. I tend to side with the first group since Scot and his team are not really featured in the book. 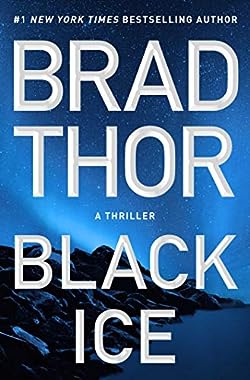 Brad Thor is a popular American author, the  #1 New York Times bestselling author for several of his spy thriller novels, and the character of Scot Harvath is well known among the lovers of the thriller genre. His first novel, The Lions of Lucerne (book #1 in the Scot Harvath series), was published in 2002 and it was also the first novel I’ve read by the author. I got hooked on his style right away.

The author was born in 1969 in Chicago, Illinois, where he also grew up.  He attended the Sacred Heart Schools and then the Francis W. Parker School, where he was classmate with actors like Billy Zane and Anne Heche, following which he enrolled at the University of Southern California studying creative writing under author T.C. Boyle. He initially enrolled for a business major, but soon he switched to creative writing when he realized that he would never love to work as a manager for some company.

While he always wanted to become a writer, he only started to pursue his dream some 30 years of his life because, as he mentioned in an interview, he was always afraid of failing.

Before he started writing novels, Brad Thor was the producer, writer, and host of the Public Television travel series, Traveling Lite. He just finished the second season and got married. On their honeymoon, his wife asked him what would be the one thing he regretted on his deathbed on never having it done. And this is when he realized that he wanted to write books.

Many critics have called Brad Thor ‘the master of thrillers’ and with good reason. He is mentioned along with names such as Robert Ludlum, and his books have been published pretty much all over the world.

I guess it is no wonder that the author knows so much about politics, espionage and similar topics, having worked at Department of Homeland Security’s Analytic Red Cell Unit, and being a member of the Alexandrian Defense Group.

He gives regularly lectures to law enforcement organizations on over-the-horizon/future threats, and to several other organizations that involve national security and defense.

For his novels, Brad Thor does thorough research. For example, to write the book The Apostle, in 2008 he shadowed in Afghanistan a Black-Ops team at work.

His book The Last Patriot was banned in Saudi Arabia as it was called “Islamophobic.”

In addition to writing books, Brad Thor often appears in TV talk-shows on CNN, Fox, PBS and other channels to discuss of terrorism and how they relate to his books and to real life.

For each year of his career, there is one Brad Thor book. The author writes one book per year, which some readers say it’s not fast enough. However, considering that there are book authors who take 2-3 years to write a single novel, I’d say Brad Thor is pretty darn fast with releasing his books.

So far, there have been over 15 million of Brad Thor books sold, and the author is often placed along with Vince Flynn as one of the biggest names in the political thriller genre.

Scot Harvath is the popular Navy Seal-turned intelligence operative/secret service agent, who will feature in the first movie adaptation of The Lions of Lucerne, which, if all goes well, will be directed by Louis Leterrier, who is best known for his work on the Transporter 1 and 2. In addition, the rights to The Athena Project have been bought by Warner Brothers, so at some point, we should see some developments in that arena as well.