With his first book published in 2011, he is one of the modern thriller authors focused on the tough character which comes after the likes of Jason Bourne, who was one of the defining first heroes of the genre.

Here are the Brad Taylor books in order of chronology for his Pike Logan series, with the year published next to each book. 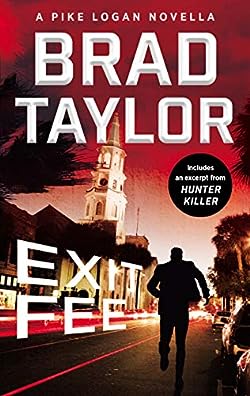 The Taskforce series is a set of short novellas in the Pike Logan thriller series. They are quick and easy to read, and a great way to enter the world of Pike Logan.

Who is Pike Logan and What Is the Taskforce?

Pike Logan starts his visible career in One Rough Man, published in 2011. He is one of the creators and also one of the most talented operatives of the Taskforce, a hidden, secret, and highly clandestine counterterrorism  organization within the government, one that no one knew about, except for the very few who either gave the order (the National Security Council) or carried out said orders. The Taskforce was created to remove any threats posed by America’s enemies against the country.

The people working in the Taskforce are a select elite group of soldiers who can go to any country in the world that threatens the US. The only country the Taskforce is forbidden to operate in is the United States itself, which makes the group’s work a bit difficult at times.

After a personal tragedy when he lost his entire family, his entire worldview changed, and things were never the same for him again.

This book also introduces us to Jennifer Cahill, who will become an important member of the team and important for Pike Logan himself. Jennifer saved Pike’s life, he saved hers, and the two became a team, forming their own private organization which no longer was under the Taskforce but was working at times with them.

After joining the military, Pike Logan joined the Ranger service for which he volunteered. In a way, Pike Logan’s life also slightly resembles that of his creator, Brad Taylor. Just like the author, Pike Logan also visited Japan, although was not born there but joined the Special Forces in Okinawa for a couple of years. After returning to the US, Pike joined (again, just like his creator), the Delta Force group where he remained for over a decade.

Over the years, he met someone he fell in love with, he married her and together, they had a daughter. While working for the Taskforce on a mission, he learned of their demise which was a pretty gruesome affair.

This is when Pike grew distance from his friends and team mates, became irritable, and didn’t want to do anything with them anymore. All he wanted was to leave.

As the series progresses, we see Pike finding a new purpose in life, slowly getting over his mourning (although never forgetting them, of course), and devoting himself to saving his country in any way necessary. In all this, he had help from Jennifer Cahill, who gave him a new purpose in life and made him fall in love again.

The way they meet is quite romantic in itself, although it seems all happened by chance. Basically, a young, 20-something Jennifer saved his life during a bar fight, and not long after, Pike is in the unique situation of reluctantly having to return the favour of saving her life as well.

Eventually the two team up and remain together as a separate team from the Taskforce, while also doing jobs for them as they see fit.

Daughter of War, the latest Pike Logan book published in 2019, finds Pike and the Taskforce stumbling across something extremely dangerous called Red Mercury, a lethal substance that the Syrians want to use against the US and the Kurds in order to assign blame for the attack on terrorists, hoping to stop international forces from getting into the Syrian civil war.

At the same time, North Korea has its own agenda about Syria, which muddies the waters even more, while also trying to use the Red Mercury to their own benefit.

An in between all this is a young 14-year-old Syrian girl, Amena, who gets tangled up with the very same thing everyone is after and is ready to kill everyone else to get it: the Red Mercury.

Brad Taylor is an American author who was born in 1965 in Okinawa, Japan. After his family returned to the US, he grew up in rural Texas, on a 40-acre farm.

As a child, he was a voracious reader, reading books in any genre he could find. He would even read during the night with a flashlight hidden under the bed sheets. From here, he would always have the idea that he would at some point write a book. Not necessarily become a writer, but definitely write a book.

He attended the University of Texas from where, after graduating, he enrolled in the Army, becoming second lieutenant in the U.S. Army Infantry.

During his time at the army, he attended Naval Postgraduate School, from where he graduated with a Master’s of Science in Defense Analysis focusing on  Irregular Warfare as his major. He remained in the military for over 20 years, during which time he commanded troops and a squadron in several areas, including 1st Special Forces Operational Detachment (Delta squad). When he retired, he held the rank of Special Forces Lieutenant Colonel.

Before retiring from the army, his last job Brad Taylor worked as was the one as an Assistant Professor of Military Science at The Citadel in Charleston, SC. During this time, when this job felt more like a 9-5 than a full-deployment, he had time to actually start writing that book he always wanted to write.

Initially, he wanted to write a story of redemption, where the main character would go through some traumatic event and would find redemption thereafter. And Pike Logan was in the author’s mind for many years, and when he finally wrote it, it was exactly that: a story of two people who find redemption through their interaction with each other.

After writing the book, he tried to find an agent, but the book was rejected several times as it had no proper structure, or format. Eventually he learned by reading and by following other authors, and his first book was ready to be released.

In 2011, the first Brad Taylor book was published under the title One Rough Man, and after the immense success of this debut novel, his career as a full-time novelist was launched. Also, this started the Pike Logan series which currently includes 13 full-length novels and several short stories and novellas.

Before creating his Pike Logan series, Brad Taylor had the character in his mind for several years in all kinds of action stories. Pike never did have a face nor a name, but he was there, brewing and becoming more and more until the series’ hero was born.

One Response to “Brad Taylor Books in Order”