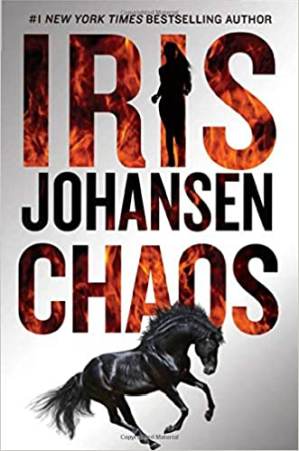 Unlike the Iris Johansen Eve Duncan series, her latest release, Chaos, focuses on a new heroine, CIA Agent Alisa Flynn. While I loved Eve Duncan and her family and friends circle, I did start to experience a slight sense of fatigue, so reading about a new fearless female character who equals her male partner in every way possible was quite refreshing.

Alisa Flynn didn’t have it easy while growing up. She was a street kid who knew all the tricks to stay alive. She was also a very fast learner, who caught the eye of a CIA agent who eventually took her in and groomed her to become one of the best agents they had.

When news of the kidnapping of a group of wealthy, young schoolgirls from an African school broke around the world, Alisa became laser-focused on one thing only: save those girls any way she could. After careful analysis, it seemed that the only way she could achieve her goal was through billionaire Gabe Korgan, who had the money, means, and brains to help achieve her very dangerous and almost elusive mission.

While sneaking into his well-guarded mansion, she was caught and the story took off from there. Of course, one of the main ingredients in any Iris Johansen romantic suspense novel is the romance mixed with suspense. From the very first pages, once Alisa met Korgan, you could almost see the sparks between them flying. The attraction is obvious, and they are both equally matched in brains, skills, and looks as well. No wonder they immediately clicked. One is definitely worthy of the other one.

Alisa was cut off from her CIA agency during this clandestine mission since she went solo without anyone knowing, but she had with her a very good friend, Margaret Douglas, whom we already know from before (the main protagonist in No Easy Target). Margaret is an excellent horse whisperer who can talk to animals, a trait that would come in handy more than once during their mission.

Eve does make a cameo appearance, but the book is not about the Eve Duncan series at all. So far this new series in the making is the furthest away from the previously interconnected series (Eve, Catherine Ling, and Kendra Michaels). It is not out of the realm of possibility the two universes to converge in later books at some point.

In terms of characters, I really liked Alisa Flynn. She is almost like a superhuman, a Wonder Woman with her crusade to save the kids. She doesn’t have any obvious flaws, and she excels in too many things at once. Some people might start to feel inferior while reading the book, she is just so perfect. I do like her character, which is different from the usual weak and romantic damsel-in-distress tropes in romance novels. Here we have a woman who can not only take care of herself but also save others if needed.

Gabe Korgan is another strong character who perfectly matches Alisa in everything. He has made his billions at an early age (some people likened him to Bill Gates). He is charismatic, also is called a “brainiac,” and it turns out, he was also in the Special Forces at some point, so he is not unfamiliar with the physical side of things.

The story itself was engaging, there was enough action to keep you glued to the pages, and the emotional play of the two main characters can warm the heart of every romance novel reader. Overall, Chaos is the perfect light, summer read whether you are on the beach or stuck at home during the Covid-19 quarantine.