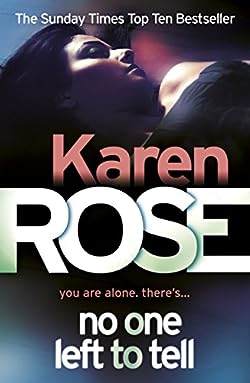 Set on the gritty streets of Baltimore, You Belong to Me kept readers “on the edges of their seats.”* Now, Karen Rose returns to the world of Baltimore’s cops and prosecutors with a new tale of danger and desire…

A car crashes in front of rookie PI Paige Holden’s home. And suddenly, she finds one of her pro bono clients dying in her arms—from a gunshot wound. With her last breath, the woman whispers cryptic words into her ear and hands her a blood-smeared flash drive.

Five years ago, State’s Attorney Grayson Smith put a murderer behind bars. Ramon Munoz has spent five years in prison, convicted of a murder his family is convinced he didn’t commit. In desperation they turn to private investigator Paige Holden for help.But when Paige Holden shares the flash drive with him, its contents cast doubts on the conviction—and lead him and Paige into a world of blackmail, dark secrets, and a decades-long string of murders. An investigation they’ll survive only by trusting each other—and the truth.