Last Updated on November 25, 2020 Jeff Lindsay is an American author who has become extremely popular with his major series – Dexter, about the cute, lovable and psychotic serial killer. Dexter has also been turned into a TV series in 2006 featuring Michael C. Hall in an 8 seasons television series that sadly ended recently. Good news is, now we have a new lovable bad guy series in Riley Wolfe starting with Just Watch Me, followed by Fool Me Twice.

I only wish the author had also written additional books in Dexter because the fact is: Jeff Lindsay knows to write. 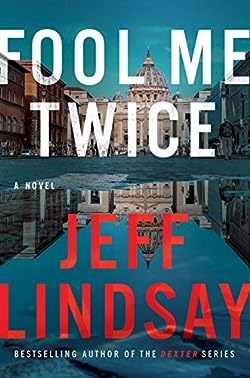 When Dexter was some 3 years old, something horrible happened to him which changed his entire life and his own outlook on life as well. Dexter’s step-father, Harry, had a strong influence on him and channeled his strange energies into a code of honor and into hiding his real face. Also, Dexter only goes after bad guys and only after he double checks and tripple checks that they are, in fact, evil guys.

Dexter is something else, he’s not your usual serial killer. Sure he is a psychopath, but he knows exactly what’s he’s doing and he tries his darnest to not harm any innocent person. He checks, rechecks and triple-checks that his next victim is indeed a psychopath himself.

Dexter is growing, developing (his character, not only his killing skills) and he is becoming more ‘human’ so to speak with every book. Initially he has no emotions, has to fake them. He has learned to adapt quite well learning from his surroundings and his peers how to behave in certain situations But over time he does bring out his humanity bit by bit.

It is is amazing to see his transformation from book to book. So yes, reading the Dexter books in proper sequence is highly recommended.

For a killer, Dexter is quite charming and funny. He is also honest to a fault, and quite smart. Usually, bad guys are shown full of themselves, however, Dexter has his own insecurities which make him approachable to the readers.

He doesn’t understand actual human traits, so he’s learned to mimic them, and over the years, he’s gotten quite good at doing it.

Should We Read the Dexter Books in Order?

This is the big question, isn’t it? And my answer is: please do so!  Reading the Dexter books in order written by Jeff Lindsay is a must if you are intrigued by a cute serial killer who has an honor code: he only kills bad guys – and Dexter Morgan knows to do it in style!

I first got familiar with the Dexter books back in the day when we had a book lovers’s group where we used to trade books among each other and organize book swaps. It was a fun time and during those days I got to learn about lots of great mysteries, thrillers and adventure novels – all books after my own heart.

I got the first book in a swap through that book and as unlikely as it seemed just from the book blurb (after all, aren’t we conditioned to hate serial killers and love those who bring them to justice?) I got totally taken by Dexter. In fact I ended up rooting for him to NOT get caught by the police in his less than kosher activities. Now how weird is that?

I got to love this series so much, that not only I ended up reading all Dexter books in order, but also started watching the TV series that was made based on the books. Now it’s true that the first season of the TV series is based on the first novel, but the rest is really departing from the books. Some people don’t like that departure much, but I personally do, because I feel like I’m watching (and reading) two different things – so twice the fun for me!

If you haven’t yet read the Dexter series written by Jeff Lindsay and you want to start from the beginning, here is the right order to tackle them. There are 8 books in the Dexter series, with the publication (and chronological) order below.

Also another question I got asked is whether it’s worth reading the Dexter books if you’re already watching the TV series. Well, as I mentioned above, for me it seems like they’re two different things, the books and the TV show.

So I really get double out of both watching and reading it. I even met some people who had no idea that Dexter is also in book form, they’ve only known about the TV series. Yes indeed, Dexter the TV show has been made based on Jeff Lindsay’s same named novels.

Here’s one of the funniest moments in Dexter (first season). Oh and that’s another thing I love about the books and the TV series. Amidst all that dark gore and blood, you find yourself either chuckling or laughing out loud at something that Dexter did or said (or thought).

Jeff Lindsay was born in Miami in 1954. After attending and finishing college at Middlebury College in Vermont, he was drawn to writing, deciding that he wanted to be an author. Initially working with Hilary Hemingway as a co-author to get his name out there, later he started to write his own books, creating one of the most successful crime series ever.

There has never been another “evil” sociopathic character as much loved as Dexter in fiction before.