Reading the Joseph Finder books in order will not only mean catching up on the Nick Heller series but also to his several standalone novels. Afterall he has way more standalone thrillers than books in his only series. Here is the author’s book list in publication order. So here are the Joseph Finder novels in chronological (and publishing) order. 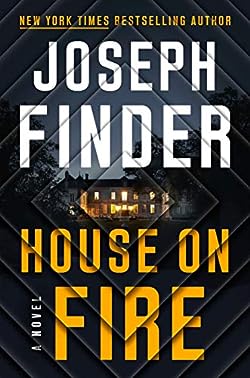 He also attended the Harvard Russian Research Center from where he received a Master’s degree. Later on, he went back to teach on the faculty there.

As a child, he loved reading books, and he devoured all the Jan Flemming novels with James Bond. In college he began reading Robert Ludlum, and this is when he decided he wanted to write books just like him.

The author’s first book, published in 1983, when he was merely 24 years old, is called Red Carpet, a non-fiction novel, which is sadly no longer in print – can be only bought second hand. It is a book with a lot of controversy around it. If you can get hold of a  copy, I urge you to read it.

His first official novel was published in 1991 with the title The Moscow Club. From then on, his reputation as a thriller author was established.

Currently, his latest standalone thriller novel is Judgement, published in 2019, whereas the latest Nick Heller book is House on Fire, released in 2020.

Joseph Finder is an author who seems to predict major political happenings in the world. The Moscow Club was published a few months before the actual coup against Soviet leader Mikhail Gorbachev happened. The book predicted that coup in its storyline. Also, Extraordinary Power, the author’s second published novel dealing with the hunt for a CIA mole was released a few days before an actual mole and traitor, Aldrich Ames, was found. His next novels also eerily predicted something that would come to pass. The Zero Hour has as topic the FBI hunt for a terrorist in New York.

His father died at the age of 97, while Joseph was writing The Fixer, and this heavily influenced the way the book would end up being written. The author realized that there were many things he didn’t know about his parents, and the actual story would become about a son learning about the real-life of his own dad. For this reason, Joseph Finder considers this book to be his most personal one.

In his standalone novels, he picks some smaller issues that would grow into the elephants that make the suspense in the stories. For example, in The Fixer, the story starts by Rick opening the wall at the back of a closet where he discovers hidden cash. In an interview, the author mentioned that he got the idea of ordinary people doing small things that would alter the course of their entire lives from Alfred Hitchcock. Suspicion, another Joe Finder book, is about Danny Goodman, a struggling writer who has a daughter in school, and he can’t afford to pay her tuition. When one day a billionaire dad, who is also the father of his daughter’s best friend, offers him a loan, he takes it, and that changes the course of his entire life as well.

I already had several of the standalone novels at home, and even his second Nick Heller book, however, I do like to read the Joseph Finder books in proper chronological order, so I was waiting to get hold of the first book in the series, which I did recently. I figured since I’ve already compiled the list for my own use, probably others will find it useful as well.

One Response to “Joseph Finder Books In Order”