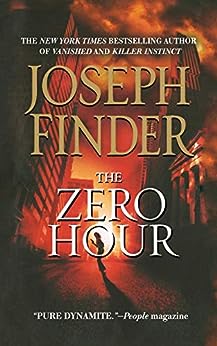 A thriller of gigantic proportions, The Zero Hour focuses on villain Henrik Baumann, a suave, cold-blooded mastermind who seeks to demolish the Wall Street computer network system that is central to the world’s financial markets. Not only is The Zero Hour a jolting story with plenty of memorable murders and lusty intrigue, its mix of finance, terrorism, and high technology are meticulously described and mostly accurate: such a computer network actually exists and its destruction could disable financial markets.

A fasten-your-seatbelt suspense thriller that recalls Eye of the Needle and Day of the Jackal, Finder’s latest novel is packed with realism and riveting insider detail. When a digitally encrypted, ominous telephone call is intercepted by the NSA’s spy satellites, FBI Special Agent Sarah Cahill is summoned to investigate an impending terrorist attack on lower Manhattan.

FBI Special Agent and counterterrorism expert Sarah Cahill doesn’t know the man she’s tracking. But the so-called “Prince of Darkness” knows her-intimately. So when Sarah is summoned to Wall Street to investigate, little does she know that she’s the one under surveillance… until the terrorist infiltrates himself into the deepest, most desperate corners of her life.

Soon Sarah is plunged into a deep labyrinth of intrigue and catastrophe as she races to uncover a diabolically clever conspiracy…before time runs out and the clock strikes THE ZERO HOUR… from bestselling author Joseph Finder.