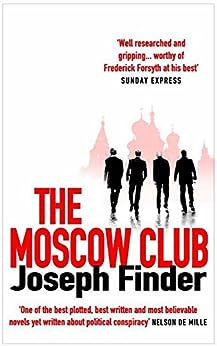 One night in a deserted street in Moscow, the chauffeur to a high-ranking official is strangled – too late to stop him smuggling out a tape hinting at the beginning of a hidden power struggle within the Kremlin. Hours later in New York, Charles Stone, a CIA agent, is given the tape’s transcript.

It’s 1991. The Cold War is over. Charlie Stone is a brilliant analyst for the CIA who made a name for himself during the height of the Cold War. But today his expertise is needed yet again: A top-secret tape—one that foretells a coup d’état in the Kremlin—has been smuggled out of the the Soviet Union by one of a few remaining moles. Stone’s assessment of the transcript is two-fold: Not only is a very real, very violent power struggle underway but the plot may be linked to an old mystery involving the imprisonment of Stone’s own father. Could a McCarthy-era enemy be trying to send Stone a deadly modern message?

Soon Stone finds himself at the center of another conspiracy—framed for a grisly murder. Without proof of his innocence, Stone enters into a terrifying game of cat-and-mouse that leads him across the country, throughought Europe, and finally, to the Soviet Union. There, he will come face to face with a group of Kremlin insiders whose ruthless agenda threatens to disrupt the fragile balance of world power—and leave Stone with nowhere left to run. But before he can thwart a tragedy of epic proportions, he must put a stop to the elusive ways and means of THE MOSCOW CLUB.