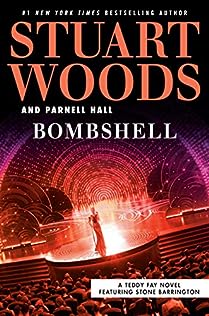 Teddy Fay is back in Hollywood and caught in two tricky situations. First, a rising star at Centurion becomes the target of malicious gossip, and Teddy must find and neutralize the source before the situation gets out of hand–or becomes violent. At the same time, Teddy finds himself targeted by a criminal thug bearing a grudge.

It’s a lot of knives to juggle, even for a former-CIA-operative-turned-movie-producer accustomed to hazardous working conditions. This time Teddy will need to leverage every bit of his undercover skills and fearless daring to stay one step ahead of his foes . . . or he’ll find himself one foot in the grave.

Bombshell is a Teddy Fay novel with Stone Barrington and Dino Bacchetti making a brief appearance in the book. Set in Hollywood, Teddy has a lot on his hands from two fighting divas a local mob boss giving him a hard time.