Last Updated on March 4, 2022 The Stuart Woods books in order include his popular Stone Barrington legal thriller series.  Stuart Woods is my favorite author to go to when I want to read a PI detective thriller with legal undertones. The Stone Barrington series features the ex-cop now PI with a law degree who solves cases after cases in each book.

Here are all the Stuart Woods books in order for his series and non-series novels. If you are new to this author, I hope you pick up some of them and become a fan, just like me and thousands of others all over the world. 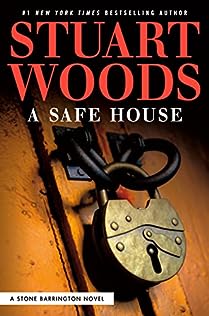 Will Lee Series In Order

Born in Manchester, Georgia, in 1938, Stuart Woods attended public school in the town, after which he attended and graduated in 1959 from the University of Georgia, with a Bachelor of Arts in sociology.

After finishing college, he enrolled in the Air National Guard where he remained for two months doing basic training. Towards the end of 1960, he moved to New York where started to work in the advertising industry earning a few dollars in a training program.

His next stop was in England, moving to London at the end of the 1960s, working for the next 3 years again in advertising, before he decided that writing a particular novel, his long childhood dream, should become finally a reality.

This is when author Stuart Woods moved to Ireland and lived in a small flat where he got writing while working part-time crafting ads at a Dublin agency for two days a week.

Sadly his dream of writing the book went sailing when he discovered that very hobby: sailing, which he took to a next level by becoming not only proficient at it but good enough to take part in various competitions and races over the next few years.

The Stuart Woods first published books were non-fiction, the first being an account of his sailing experience in Ireland and the transatlantic race, called Blue Water, Green Skipper, and the second book called A Romantic’s Guide to the Country Inns of Britain and Ireland is a travel book that he wrote on a whim.

The debut novel by Stuart Woods, which he started a long time ago, was finally written and published in 1981 under the title Chiefs, a book which sold many paperbacks and became a CBS TV drama featuring Charlton Heston in the main role.  Chiefs earned the Best First Novel Edgar Allan Poe Award from the Mystery Writers Of America.

Chiefs would also become the first book in his Will Lee series. This book established Stuart Woods as a real published author, which also shaped the direction his life and work would take from here on.

His best-known and most popular books are centered around Stone Barrington, an ex NYPD detective who now works as a lawyer taking on shady cases.

The first book I’ve read by Stuart Woods was New York Dead, which is also the author’s first book in the series, published in 1991. I think I’ve read the book in 1995 and I got hooked. I’ve soon found whatever I missed from the series until then, and stayed on the tail of this author ever since.

In the meantime, the author has over 70 books published, which includes 4 other crime mystery series as well.

While I have read some of the Stuart Books books in order in his other series, Stone Barrington series is still my favorite and probably will ever remain so. It is also the series with the most books included. Although if I have to choose just one most favorite book by Stuart Woods, it will be Palindrome. It is a standalone novel and so far the best he has ever written, at least in my humble opinion.

As he mentioned on his website (in the Interviews section), his publishers asked him to write 3 books a year, much to the delight of the author’s fans who love his writing. Way more convenient to be able to read 3 Stuart Books books within a year rather than having to wait a full year – or two until the next book in a series comes out as it happens with numerous other authors.

Quick & Dirty, Stuart Woods Stone Barrington #43, takes Barrington to the world of art. When a gets involved with a hedge fund widow goes to his office to ask for his help after the widow’s husband fell off the balcony, he falls hard for her. At the same time, he is asked by Arthur Steele’s insurance company to investigate the disappearance of a Van Gogh painting, one which was in the possession of said hedge fund.

The story is a fun romp in the sexy world of Stone Barrington who cruises the scene of the rich and famous with all the ease in the world. There are plenty of twists and turns in the book to keep you engaged. I do miss a bit the old Barrington, however, as this new one of the latest books is a bit soapy, a bit too much of a womanizer and no longer the classy guy he used to be.

Nevertheless, the book is addictive to any Stuart Woods fan and we will continue reading his novels as fast as he keeps on writing them (which is about 3 books a year).

The next book, Unbound, takes us from the glamorous world of Hollywood to the dry New Mexico desert in another exciting adventure with Stone Barrington and Ed Eagle (who also has his own series).

In Wild Card, follows directly the events in A Delicate Touch, so the two books at least should be read in order. Stone Barrington and his latest love interest, New York Times reporter Jamie Cox, are relaxing at Stone’s English estate. While there, Jamie is hard at work on her latest book about the connection between organized crime and Henry Thomas who own his own investment bank. Much of the information has been received from Stone, who basically exposed the corruption, so now Henry Thomas sent his henchman to stop Stone and his girlfriend once and for all. This is when Stone and Jamie leave England to retreat to his Manhattan t0wnhouse which should be safer for them. When Henry hires an assassin to kill Stone, his job might be much easier since from the time Stone and Jamie are in Manhattan, they believe they are truly safer. Hint: they are not.

One of the latest Stone Barrington book takes us to Florida where Stone Barrington is taking a much-needed vacation which is interrupted when something falls from the sky. He teams up with a detective to investigate the issue when the evidence seems to disappear. And before he knows it, he is drawn into a web of deceit and crime that follows him wherever he goes – along with old and new enemies who just can’t leave him be.

21 Responses to “List of Stuart Woods Books In Order”