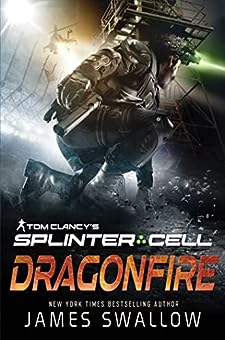 Inside North Korea, veteran Fourth Echelon agent Sam Fisher finds himself on the run when a top-secret covert mission goes fatally wrong. Betrayed by his allies, hunted by his adversaries, and disavowed by his own agency, Sam is stranded deep inside hostile territory – and his only chance of survival is to uncover a murderous plot that reaches into the heart of the hermit state and beyond.

Meanwhile, Fisher’s estranged daughter Sarah risks everything to assemble an off-the-books effort to find her missing father before his luck runs out – but the conspiracy that framed Sam goes deeper than either of them realize…

“James Swallow scores a lethal hit with Splinter Cell: Dragonfire that ramps up the awesomeness of the Splinter Cell games to a whole nother level and blows past the high bar set by its predecessor, Splinter Cell: Firewall.” — Best Thriller Books