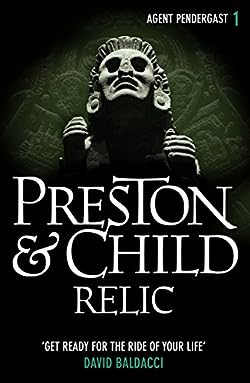 When a team of archaeologists is savagely massacred in the Amazon Basin, all that survives are several boxes of relics and plant specimens. From boat to boat, from port to port, the battered crates drift. They finally reach New York City – only to be locked away in the basement of a museum, lost and forgotten.

But the black heart of the Amazon never forgets. Just days before the Museum’s massive new exhibition opens someone or something other than tourists and school children is roaming the echoing halls and dusty galleries. And people are turning up savagely murdered.

Forensic evidence points to a killer of terrifying strength and ferocity. Rumors of a “Museum Beast,” never far from the surface, rise again among the Museum staff. But then Margo Green, a graduate student working in the Museum, uncovers a link between the killings, the failed Amazonian expedition, and an odd figurine that will be displayed for the first time. Will she be able to put the pieces together and stop the deadly menace before terror strikes again?