Last Updated on January 9, 2019 Reading the Mark Alpert books in order means catching up to his techno-thriller novels including the Final Theory and The Omega Theory as part of his popular Final Theory series. The author is a well-known American thriller, young adult, as well as sci-fi writer. I love his Final Theory series and I wish there were a third book coming out at some point.

Here are the Mark Alpert books in order for his high-tech thriller novels both for the adults and the young. 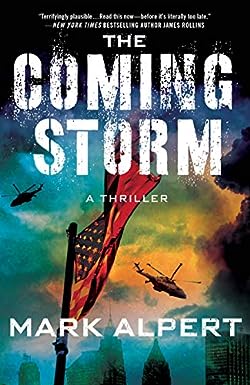 Other Books By Mark Alpert

Mark Alpert was born in New York City. At the age of 12, after reading Michael Crichton’s Andromeda Strain, he wanted to write a story as well, but soon he gave up. The next attempt was during his high-school years after reading The Lord of the Rings. Again, he attempted to write but never finished his book.

Being always fascinated by science (self-proclaimed a “science geek”) Mark Alpert majored in astrophysics at Princeton University. His undergraduate thesis was about “the application of the theory of relativity to Flatland, a hypothetical universe with only two spatial dimensions”, in a nutshell, the application of Einstein’s theory of relativity.

His first job was that of a journalist in Claremont. In 1987 he became a reporter for the Fortune Magazine where he spent his next 5 years writing about modern technologies and computing. The magazine Popular Mechanics (which my dad was a subscriber for several years) found Mark Alpert a freelance article contributor.

He also worked for the Montgomery Advertiser in Alabama, where he covered Governor George Wallace’s last term. Based on his experiences during this time, he wrote his first novel, titled The Emperor of Alabama, which was not accepted by publishers for release. He further wrote a couple of books that were never published, bus, still, Mark Alpert was hooked on writing.

His wrote and sold his first fiction short story to the Playboy magazine with the title My Life with Joanne Christiansen in 1991.

Mark Alpert also worked as a freelance reporter for Popular Mechanics, where he contributed several stories. In addition, he wrote the anchor for CNN’s show titled Moneyline, a show that ran between 1980-2003.

Around that time, the magazine Scientific American offered him a board of editors membership which he took in 1998, giving him the opportunity to write a regular column on exotic high-tech gadgets.

His debut novel, Final Theory, published in 2008 by Simon & Schuster was his ticket into the world of the popular high-tech thriller genre. Finally, his long life love of science paid off. The movie rights were bought by Radar Pictures, a Los Angeles production company. The successful debut novel, Final Theory, revolves around Einstein’s Unified Theory of Everything, which many scientists consider the holy grail of modern physics. The premise of the story asks the question, “What if Einstein actually did discover a Theory of Everything, but then realized that it would lead to weapons even worse than nuclear bombs? Would he have published the theory anyway?”

He followed with a second novel in the same series, called The Omega Theory, a book which became as successful as the first one.

After several novels for adults, he has recently published his first young adult story in The Six, a book equally geeky and equally fun, about six dying teenagers who choose to have their brains downloaded into the US Army robots in order to live on.

His standalone novel, Extinction, was born out of an idea Mark Alpert had while working for Scientific American and editing a story about researchers mounting cameras on insects. This gave him the idea for a science-fiction thriller novel which would combine the sci-fi aspect of cyborgs with a government surveillance network, which has ties to China. Before writing the book, the author visited China for two weeks to get an idea of the country and its settings for the story.

Coming Storm, published early 2019, is a standalone novel set in New York in the near future, in 2023, in a post-apocalyptic world. New York is now a warzone inhabited by genetically enhanced federal agents who stand for a very far-right agenda. Jenna Khan is a young scientist on the run who might be the only person able to help those agents who have been part of a secret experiment that is slowly destroying them. The book is a fun and modern techno-thriller that exposes the dangers of genetical engineering and political corruption.

Through his work as a contributing editor at the Scientific American magazine, he has always thrived to explain scientific and arcane concepts such as parallel universes and other dimensions to the masses. His books express his love for such esoteric ideas where he mixes science, technology, and spellbinding stories into successful and popular thrillers.

Currently, the author lives in Manhattan with his wife and two kids, where he works on his next novel.