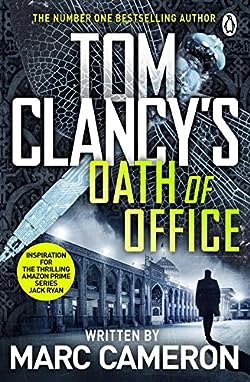 President Jack Ryan preaches caution when the prospects for a Persian Spring excite the rest of the world. His is the lone Western voice urging watchfulness. As he says, “Sometimes it’s better to have all the bad guys all in one place where you can keep an eye on them rather than scattered around the Middle East.”

On a crowded tourist beach in Portugal, US operatives use a high-tech drone to watch a French arms dealer flirt with a beautiful woman. It’s only when she leaves that they realise she has shot him dead.

In Iran, protests are growing against the oppressive regime, whipped up by a charismatic student. Most external observers are excited, but on the ground a spy of questionable loyalty senses something is badly amiss.

Meanwhile, the Campus has been trailing a major international arms dealer whose business has waxed as the power of the Ayatollah has waned. Now the change of regimes in Iran has opened up formerly unimagined possibilities to him. Possibilities that may lead to a new balance of power in the region.