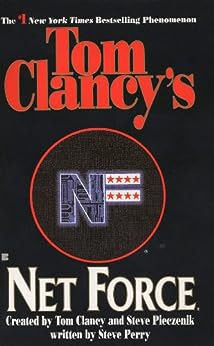 From the #1 New York Times bestselling creators of Op-Center comes a different kind of law enforcement. In the year 2010, computers are the new superpowers. Those who control them, control the world. To enforce the Net Laws, Congress forms the ultimate computer security agency within the FBI: the Net Force.

In the year 2010, computers are the new superpower.  Those who control them control the world.  To enforce the New Laws, Congress creates the ultimate computer security agency with the FBI: the New Force.

Instructions on how to make a bomb…a list of every U.S. spy in the Euro-Asian theater…Someone with access to classified information is posting it on the Internet-and it’s costing lives.  Net Force Commander Alex Michaels is in the hot seat.  Now, before a hostile Senate committee, he must justify the very existence of the Net Force.

Meanwhile, a virus is unleashed that throws the federal financial systems into chaos.  And the Net Force operatives must hunt the wily hacker through the twists and turns of cyberspace-down a path that leads them dangerously close to home…