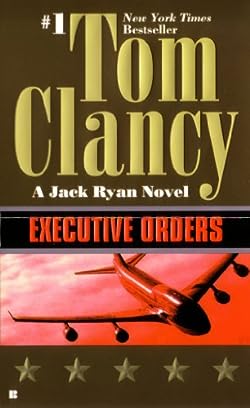 The President is dead–and the weight, literally, of the world falls on Jack Ryan’s shoulders, in Tom Clancy’s newest and most extraordinary novel.

I don’t know what to do. Where’s the manual, the training course, for this job? Whom do I ask? Where do I go?

When a runaway Jumbo jet has crashed into the Capitol Building in Washington, leaving the President dead along with most of the Cabinet and Congress, there was only one option now. Dazed a confused, the man who only minutes before was confirmed as the new caretaker Vice-President is told that he is now President of the United States.

But how do you run a government without a government? Where do you begin? Ryan knows that the eyes of the world are on him now – and many of them are unfriendly.

In Beijing, in Tehran and even in Washington, there are those eager to take advantage. Soon they will make their moves; soon they will present Jack Ryan with a crisis so even he could not imagine it.