Last Updated on May 11, 2020 Scott Turow s the American author of the Kindle County legal thriller series, which currently includes 11 books. The latest book in the series is titled The Last Trial, published in 2020.

In addition to his mystery series, the author also wrote a standalone novel, Ordinary Heroes, published in 2005, and three non-fiction books. Here are the Scott Turow books in order for his popular legal thriller series, Kindle County. 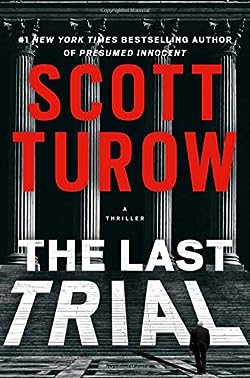 Other Books by Scott Turow

Born in 1949 in Chicago to a Russian-Jewish family, he attended New Trier High School, and after his graduation he enrolled at Amherst College, from which he graduated in 1970 as Alpha Delta Phi Literary Society Brother.

Between 1970-1972 he attended Stanford University’s Creative Writing Center, which earned him an Edith Mirrielees Fellowship. He later became a Jones Lecturer, where he also taught creative writing. He remained there until 1975 when he enrolled to Harvard Law School.

Two years later, in 1977 he wrote One L, his debut work and non-fiction story about his first year of college.

The next year, in 1978, he earned his J.D., following which he became an assistant United State Attorney in Chicago, where he remained until 1986. During his time he prosecuted various corruption cases, including the notorious  case of state Attorney General William Scott involving tax fraud.

Eventually Scott Turow left his job as an attorney, and decided to become a full-time novelist. His first novel, Presumed Innocent, became the first in his Kindle County legal thriller series and it was published in 1987. The book dealt with the issue of a prosecutor who was charged with the murder of his colleague.

The next following years he wrote several other books in the series, including The Burden of Proof, Pleading Guilty and The Law of Our Fathers, all of which became bestsellers.

Several of his books, including Presumed Innocent, The Burden of Proof, Reversible Errors and Innocent have been made into movies.

His latest novel, Testimony, is set in The Hague in the Netherlands, where the main character investigates the disappearance of a Roma village during the war in Bosnia. The book, published in 2017 marks the 40th anniversary of the author’s debut as a novelist.

Currently Scott Turow is also a partner in Denton, an international law firm, and he works most of his cases pro bono.

One Response to “Scott Turow Books in Order”