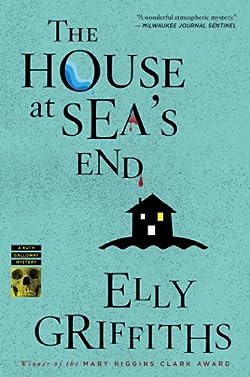 The House at Sea’s End

by Elly Griffiths
Book #3 in the Ruth Galloway series (2011)

Ruth Galloway has just returned from maternity leave and is struggling to juggle work and motherhood. When a team from the University of North Norfolk, investigating coastal erosion, finds six bodies buried at the foot of the cliff, she is immediately put on the case.

DCI Nelson is investigating, but Ruth finds this more hindrance than help – Nelson is the father of her daughter, Kate. Still, she remains professional and concentrates on the case at hand. Forensic tests prove that the bodies are from Southern Europe, killed sixty years ago. Police Investigations unearth records of Project Lucifer, a wartime plan to stop a German invasion. A further discovery reveals that members of the Broughton Sea’s End Home Guard took a ‘blood oath’ to conceal some deadly wartime secret. The more information they uncover, the more elusive any explanation becomes.

When a visiting German reporter is killed, Ruth and Nelson realise that someone is still alive who will kill to keep the secret of Broughton Sea’s End’s war years. Can they discover the truth in time to stop another murder?