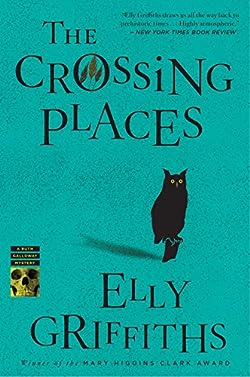 by Elly Griffiths
Book #1 in the Ruth Galloway series (2009)

When she’s not digging up bones or other ancient objects, quirky, tart-tongued archaeologist Ruth Galloway lives happily alone in a remote area called Saltmarsh near Norfolk, land that was sacred to its Iron Age inhabitants – not quite earth, not quite sea.

When a child’s bones are found on a desolate beach nearby, Detective Chief Inspector Harry Nelson calls Galloway for help. Nelson thinks he has found the remains of Lucy Downey, a little girl who went missing ten years ago. Since her disappearance he has been receiving bizarre letters about her, letters with references to ritual and sacrifice.

The bones actually turn out to be two thousand years old, but Ruth is soon drawn into the Lucy Downey case and into the mind of the letter writer, who seems to have both archaeological knowledge and eerie psychic powers. Then another child goes missing and the hunt is on to find her. As the letter writer moves closer and the windswept Norfolk landscape exerts its power, Ruth finds herself in completely new territory – and in serious danger.