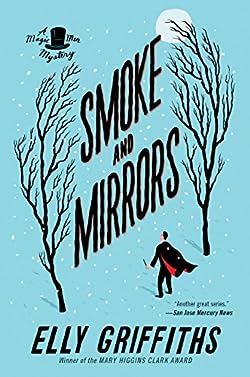 It’s Christmastime in Brighton, and the city is abuzz about magician Max Mephisto’s star turn in Aladdin.

Pantomime season is in full swing on the pier, but Max’s headlines have been stolen by the disappearance of two local children. When they are found dead in the snow, surrounded by sweets, it’s not long before the press nickname them ‘Hansel and Gretel’.

DI Edgar Stephens has plenty of leads to investigate. The girl, Annie, used to write gruesome plays based on the Grimms’ fairy tales. Does the clue lie in Annie’s unfinished – and rather disturbing – last script? Or might it lie with the eccentric theatricals who have assembled for the pantomime?

For Stan (aka the Great Diablo), who’s also appearing in Aladdin, the case raises more personal memories. Back before the Great War, he witnessed the murder of a young girl while he was starring in another show, an event which has eerie parallels to the current case.

Once again Edgar enlists Max’s help in penetrating the shadowy theatrical world that seems to hold the key. But with both distracted by their own personal problems, neither can afford to miss a trick. For Annie and her friend, time is running out…