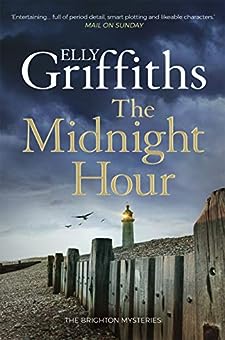 The sixth gripping Brighton-based mystery from the bestselling author of the Dr Ruth Galloway Series – a must-read for all fans of cosy – but not too cosy – crime fiction.

When theatrical impresario Bert Billington is found dead in his retirement home, no one suspects foul play. But when the postmortem reveals that he was poisoned, suspicion falls on his wife, eccentric ex-Music Hall star Verity Malone.

Frustrated by the police response to Bert’s death and determined to prove her innocence, Verity calls in private detective duo Emma Holmes and Sam Collins. This is their first real case, but as luck would have it they have a friend on the inside: Max Mephisto is filming a remake of Dracula, starring Seth Bellington, Bert’s son. But when they question Max, they feel he isn’t telling them the whole story.

Emma and Sam must vie with the police to untangle the case and bring the killer to justice. They’re sure the answers must lie in Bert’s dark past and in the glamorous, occasionally deadly, days of Music Hall. But the closer they get to the truth, the more danger they find themselves in…