With over 30 novels in this genre written so far, many of which have been at some point or another on New York Times’ bestseller list, the author has perfected his writing formula over the years, which keeps his loyal readers hooked book after book.

Here are the Robin Cook books in order of publication and reading order for his standalone novels and book series. 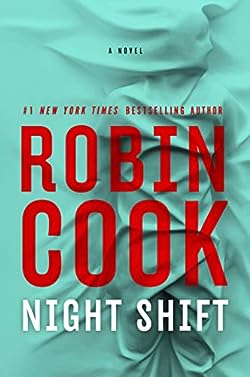 Robin Cook was born in 1940 in New York City in Queens. He lived there until the age of 8 when he moved to Leonia, New Jersey with his parents. Two years later his baby sister was born, which made him no longer be the youngest in the family.

After high school, Robin Cook realized that his main inter

When he was drafted into the Navy, he started out at the submarine school and navy diving school. Later on, he trained as a navy aquanaut medical officer and it was during this time that he worked on his first non-fiction book, A Medical Watch Standers Guide to Saturation Diving.

Once he was discharged from the Navy as a Lieutenant Commander, Robin Cook went back to medicine, taking a residency in ophthalmology at Harvard University, following which he enrolled as a full-time student at Harvard’s Kennedy School of Government. During this time he also had a private practice of ophthalmology in Massachusetts. He finished his post graduate in medical training at the Harvard University. Robin Cook is a private member of the Woodrow Wilson Center’s Board of Trustees.

Most of dr. Cook’s novels take place in hospitals and evolve around serious medical issues, combining a love for medicine, mystery, and crime. Many of his books are about current issues that affect everyone equally, including stem cell research, organ donation, fertility treatment, medical malpractice, genetic engineering, and organ transplants, medical tourism, organ transplant, among others.

During an interview, Robin Cook mentioned why his books are so popular all over the world:

“The key reason is, we should all realize that were at risk. We are all at one time or another going to become patients,[…] You may write about the great white sharks and/or the haunted houses, & you may say I am not going near an ocean or/and I am not going into haunted places, but you cannot say you aren’t going to the hospital.”

While Robin Cook’s very first novel was The Year Of The Intern, Robin Cook really became popular after publishing Coma in 1977. Once he figured out what his first novel was lacking and why it wasn’t as successful as hoped, through his in-depth analysis of contemporary books in the genre to learn what makes them really tick, Robin Cook applied all that he learned in Coma and in all the books that followed after that.

The result was almost an overnight international fame with a long list of loyal followers worldwide. Several of his books have also been featured in Reader’s Digest. They focus on medical suspense thriller, which skillfully combines intricately plotted murders and intrigue with modern medical technology. In an interview he mentioned, “I joke that in case my novels stop selling or flying off the shelves, I can always fall-back to the brain surgery.”

Many of Robin Cook’s novels have been adapted to TV and/or the big screen as a feature film, including Coma (directed by author and doctor Michael Crichton), Invasion, Foreign Body, Harmful Intent, Mortal Fear, Outbreak, Sphynx, and Terminal.

The latest Robin Cook book is called Night Shift, and was published in 2022. It is part of his popular Jack Stapleton and Laurie Montgomery medical book series.

One of my favorite Robin Cook’s books, Charlatans, is, as usual, set in a hospital, like most of the other books by Robin Cook, and it features Dr. Noah Rothauser, who fears that something is very wrong at the hospital since patients are dying on the operating table during seemingly very routine surgeries. It is a major part of the Robin Cook book list.

Dr. William Mason, a respected surgeon at the hospital, for some reason, wants Noah gone and he does everything he can to sabotage him. Then we are introduced to Dr. Ava London, who starts an affair with Noah, but he isn’t sure what is the deal with her. How come when the patients she is putting under anesthesia are dying first of all? Is she guilty or, just like him, she is a victim of sabotage?

Each Robin Cook novel is suspenseful from the beginning to the end. The books are usually formulaic. Some things I figured out after a few chapters, although the author does have a few aces up on his sleeves, which I didn’t see coming. However, that does not diminish their entertaining power over us. Every time I pick a Robin Cook novel I know that I will be in for a few quite interesting and fun hours. The Robin Cook books in reading order are recommended for his Jack Stapleton & Laurie Montgomery series.

7 Responses to “Robin Cook Books In Order – A Complete List”