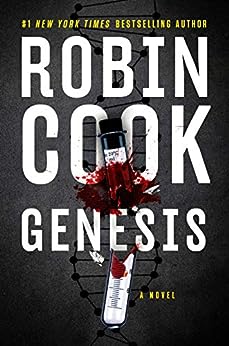 Book #12 in the Jack Stapleton and Laurie Montgomery series, published 2019

New York Times-bestselling author Robin Cook takes on the ripped-from-the-headlines topic of using genealogical DNA database tracking to catch a killer in this unforgettable new medical thriller. The book features a physician, with a huge emphasis on genetics, genealogy, the new research methods used in both, as well as forensic science.

When the body of twenty-nine-year-old social worker Gloria Montoya, seven weeks pregnant with her first child, shows up on Chief New York City Medical Examiner Laurie Montgomery’s autopsy table, she’s baffled to find no apparent causes of death. With no clues to go on, Laurie enlists the help of Dr. Tricia Albanese, a forensic pathology resident with a background in genetic science, to help her trace the identity of the unborn baby’s father using DNA from the mother and child.

But when Tricia is found dead in her apartment in a manner strikingly similar to Gloria’s death, Laurie realizes she might have two linked homicides on her hands…and now it’s up to her, with the help of her husband, ME Jack Stapleton, to continue the tracking work Tricia had begun before a killer can strike again.