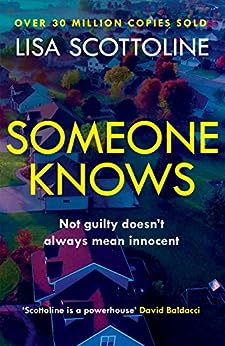 From the New York Times-bestselling author comes a pulse-pounding domestic thriller about a group of friends who have been bound for twenty years by a single secret—and will now be undone by it. Someone Knows is an emotional exploration of friendship and family, as well as a psychological exploration of guilt and memory.

Twenty years ago, in an upscale suburb of Philadelphia, four teenagers spent a summer as closest friends: drinking, sharing secrets, testing boundaries. When a new boy looked to join them, they decided to pull a prank on him, convincing him to play Russian roulette as an initiation into their group. They secretly planned to leave the gun unloaded—but what happened next would change each of them forever.

Now three of the four reunite for the first time since that horrible summer. The guilt—and the lingering question about who loaded the gun—drove them apart. But after one of the group apparently commits suicide with a gun, their old secrets come roaring back. One of them is going to figure out if the new suicide is what it seems, and if it connects to the events of that long-ago summer. Someone knows exactly what happened—but who? And how far will they go to keep their secrets buried?