The author has also written a true crime series titled From the Files of Linda Fairstein and has recently started a new mystery series for children, called Devlin Quick, with two books currently published.

I am generally not a major fan of true-crime books, so I have not yet read the author’s series, but I am religiously following her Alex Cooper series.

While the books can be read as standalone novels, it makes much more sense to read the series in order, to follow Alex and Mike’s relationship evolve. 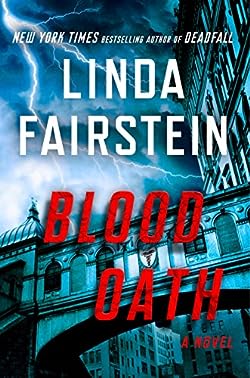 Linda Fairstein (website) was born in 1947. She attended Vassar College, from which she graduated with honors in 1969. She next attended the University of Virginia School of Law, graduating in 1972.

The same year she joined the Manhattan District Attorney’s office as an Assistant District Attorney (just like her Alexandra Cooper character) and in 1976 she became head of the sex crimes unit.

In 2002 she left District Attorney’s office, but she continued to serve as a sex crime expert, lecturer and writer to several media outlets, including CNN, MSNBC, and Larry King show.

She is often speaking on issues of domestic abuse at various meetings. Linda Fairstein currently lives with her second husband, Michael Goldberg, in Manhattan and on Martha’s Vineyard.

Her debut novel, Final Jeopardy, was released in 1996 and it became the first in her popular Alex Cooper series, which currently includes 19 books, with the latest one published in 2017 titled Deadfall.

The author’s novels have been so far translated into more than a dozen different languages.

Here are the Linda Fairstein books in order for her popular Alexandra Cooper thriller series.