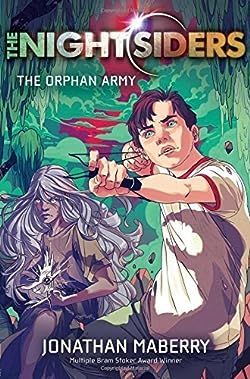 Book #1 in the The Nightsiders series, published 2015

Milo’s Louisiana bayou is overrun with alien bug invaders and magical creatures in this start to a breathtaking series from bestselling author Jonathan Maberry.

In a world filled with Bugs – monsters that ceaselessly ravage the Earth – Milo Silk has a hard time keeping his dreams separate from reality. So he keeps them locked up in his dream journal and hopes they’ll never come to pass. But too often, they do – like when his father disappeared three years ago. Lately, the Witch of the World has been haunting his dreams, saying he is destined to be the hero who saves everyone. But all Milo can think about is how he fears the Bugs will attack his own camp, and bring something even more terrible than ever before.

What Milo doesn’t know is that the Earth is already fighting back with its own natural power in the form of Nightsiders, magical creatures who prefer shadows to sunlight and who reside in trees, caves, and rivers. And the Nightsiders are ready to find an ally in Milo!