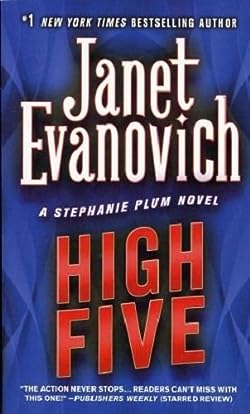 Stephanie Plum has a whole lot of trouble on her doorstep.

Out of bail skippers and rent money, Stephanie Plum throws caution to the wind and follows in the entrepreneurial bootsteps of Super Bounty Hunter, Ranger, engaging in morally correct and marginally legal enterprises. So, a scumball blows himself to smithereens on her first day of policing a crack house and the sheik she was chauffeuring stole the limo. But hey, nobody’s perfect!

Her Uncle Fred has disappeared and Grandma Mazur is convinced he’s been abducted by aliens.

Meanwhile, Cousin Vinnie has asked her to bring in the vertically challenged Randy Briggs who’s jumped bail. But instead of coming quietly, he has taken up residence in Stephanie’s closet. The mysterious man called Bunchy is trailing Stephanie in the hope of tracking down Fred. And Benito Ramirez is back from jail, quoting Scripture and vowing to introduce Stephanie to God – face to face.

Thankfully Joe Morelli, the irresistible cop, is still around to give her the odd sleepless night – though now he faces tough competition from the enigmatic Ranger…