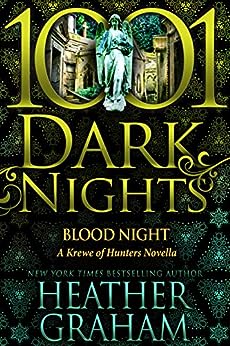 Any member of the Krewe of Hunters is accustomed to the strange. And to conversing now and then with the dead. For Andre Rousseau and Cheyenne Donegal, an encounter with the deceased in a cemetery is certainly nothing new. But this year, Halloween is taking them across the pond—unofficially. Their experiences in life haven’t prepared them for what’s to come.

Cheyenne’s distant cousin and dear friend Emily Donegal has called from London. Murder has come to her neighborhood, with bodies just outside Highgate Cemetery, drained of blood.

The last victim was found at Emily’s doorstep, and the evidence seems to be arising not just against her fiancé, Eric, but against Emily, too. But Emily isn’t just afraid of the law—many in the great city are beginning to believe that the historic Vampire of Highgate is making himself known, aided and abetted by adherents. Some are even angry and frightened enough to believe they should take matters into their own hands.

Andre and Cheyenne know they’re in for serious trouble when they arrive, and they soon come to realize that the trouble might be deadly not just for Emily and Eric, but for themselves as well.

There’s help to be found in the beautiful and historic old cemetery.

And as All Hallows Eve looms, they’ll be in a race against time, seeking the truth before the infamous vampire has a chance to strike again.