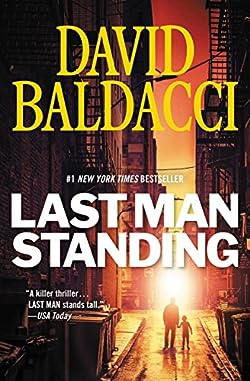 A brilliant new action adventure from one of the world’s leading thriller writers, David Baldacci.

When his hostage rescue team is wiped out in a brutal set-up, Web London is the last man standing. Now he just has to keep it that way…

It took seven seconds for Web London to lose everything: his friends, his team, his reputation. Point man of the FBI’s super-elite Hostage Rescue Team, Web roared into a blind alley toward a drug leader’s lair, only to meet a high-tech, custom-designed ambush that killed everyone around him.

Now coping with the blame-filled words of anguished widows and the suspicions of colleagues, Web tries to put his life back together. To do so, he must discover why he was the one man who lived through the ambush – and find the only other person who came out of the alley alive…a ten-year-old boy who has since disappeared.

Last Man Standing is an explosive psychological thriller about a man desperate to find answers – from the secret terrors he has kept for himself to his unbearable guilt. His fight to save himself and those he cares for will come at a high cost… and threaten everything he has grown to believe in. With vividly realized characters and a breathtaking pace, this is another spellbinding novel from David Baldacci, one of today’s best storytellers.