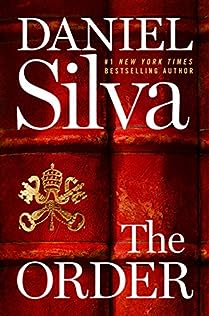 From Daniel Silva, author of the #1 New York Times bestsellers The New Girl and The Other Woman, comes a stunning new action-packed thriller of high stakes international intrigue featuring the enigmatic art restorer and master spy Gabriel Allon. The 20th book of the series starts with the death of the sitting pope at the Vatican, and some irregularities about the death noticed by the pope’s private secretary.

Master of the spy thriller Silva has entertained readers with twenty-two thoughtful and gripping suspense novels featuring a diverse cast of compelling characters and ingenious plots that have taken them around the globe and back—from the United States to Europe, Russia to the Middle East.

It was supposed to be a vacation. A badly needed, week-long trip to relax and recharge. And after years of dedicated service that has no doubt taken a major toll on him and his family, nobody needed it more than Gabriel Allon, the master art restorer turned Israeli assassin who’s now halfway into his first term as chief of the Office.

He returns with another blockbuster—a powerhouse novel that showcases his outstanding skill and brilliant imagination, destined to be a must read for both his multitudes of fans and growing legions of converts.