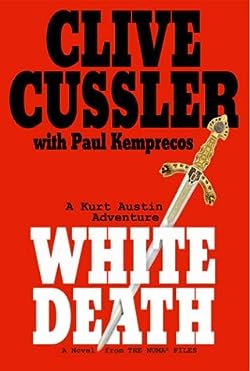 When a confrontation between a radical environmental group and a Danish cruiser off the Faroe Islands sinks a ship, trapping her crew beneath the waves, Kurt Austin of NUMA is immediately called to the rescue.

Investigating the collision, Austin uncovers a trail of sabotage that leads to a sinister multinational corporation seeking control of the waves. When he is almost killed for his trouble, Austin knows that this is one organization that will let nothing stand in its way. But with an environmental disaster underway, the clock is ticking for Austin and the NUMA team…

Filled with heart-stopping adventure and endless imagination, White Death is an exceptional thriller from a writer at the height of his powers.

Clive Cussler, author of the best-selling Dirk Pitt novels Arctic Drift and The Treasure of Khan, and co-author Paul Kemprecos navigate a treacherous sea of sabotage and conspiracy in White Death, the fourth novel of the action-packed NUMA Files series. Lost City and Polar Shift are the fifth and sixth.