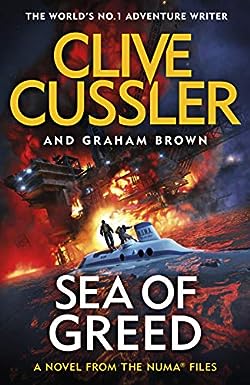 Two submarines–one French, one Israeli–vanish in the Mediterranean within days of each other. Extensive search-and-rescue operations turn up no sign of either vessel. Thirty years later, the wreck of one is found; the other is never recovered.

After an explosion in the Gulf of Mexico destroys three oil rigs trying to revive a dying field, Kurt, Joe and NUMA are tapped by the President of the United States to find out why many of the world’s most productive oilfields have gone dry. The trail leads them to Tessa Franco, a brilliant billionaire in the alternative energy field. Tessa’s goal is the end of the oil age; her company has spent billions developing the most powerful and efficient fuel-cell systems the world has ever seen. In the eyes of many she’s an environmental hero, but her connection to a rogue genetic engineer and central Asian money suggest something more.

The NUMA crew discovers that the oil fields are infected with a bacteria that is consuming the oil before it can be pumped out of the earth–and initial studies reveal no way to stop it. With the price of oil tripling, the world’s stock markets crashing and the health of the global economy hanging in the balance, Kurt is up against it. But finding a submarine that’s remained hidden for fifty years won’t be easy. And with uncountable money and an army of hired killers at her disposal, Tessa Franco will do everything in her power to stop him.