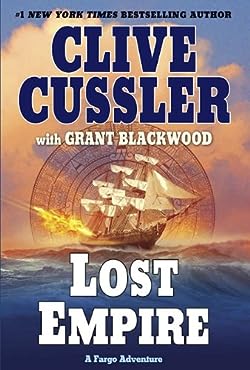 With Spartan Gold, Clive Cussler introduced husband-and-wife treasure-hunting team Sam and Remi Fargo. In their electrifying new adventure, the Fargos make a startling discovery that others would kill to keep hidden…

While scuba diving in Tanzania, Sam and Remi Fargo come upon a relic belonging to a long-lost Confederate ship. An anomaly about the relic sets them off chasing a mystery-but unknown to them, a much more powerful force is engaged in the same chase. Mexico’s ruling party, the ultranationalist Mexica Tenochca, is intent on finding that artifact as well, because it contains a secret that could destroy the party utterly.

Through Tanzania and Zanzibar, into the rainforests of Madagascar, and across the Indian Ocean to Indonesia and the legendary site of the 1883 Krakatoa explosion, the Fargos and their ruthless opponents pursue the hunt-but only one can win. And the penalty for failure is death.

Filled with the dazzling suspense and breathtaking action that are Cussler’s trademarks, Lost Empire is a stunning new novel from the grand master of adventure.