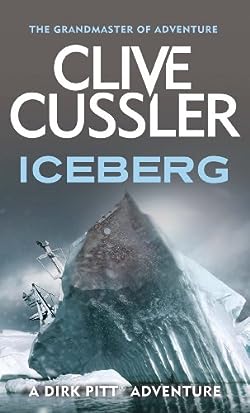 Reverting terror and murder becomes Dirk Pitt’s goal when he discovers the hideout of the ship and its secret.

Frozen inside a million-ton mass of ice-the charred remains of a long missing luxury yacht, vanished en route to a secret White House rendezvous.  The only clue to the ship’s priceless-and missing-cargo: nine ornately carved rings and the horribly burned bodies of its crew.

The towering iceberg drifting in the North Atlantic was a floating tomb. Embedded in the great gleaming mass was a ship – sealed in so solidly that not even its mast protruded.

Here was a sea mystery to rank alongside the Bermuda Triangle and the Marie Celeste. But for Major Dirk Pitt, top troubleshooter for the National Underwater and Marine Agency, it was also the first link in a fantastic chain of events that would lead him too close – and too often – to violent death. And to the discovery of the most sinister and bizarre conspiracy of the century . . . ICEBERG.